Woods, Fluff hug it out at Quicken Loans National

You don’t forget your first major championship success in a hurry…nor the man that helped get you there.

For that reason there was more than a smile and a friendly wave when Tiger Woods caught up with the man who carried his bag in the 1997 US Masters win, Mike ‘Fluff’ Cowan. 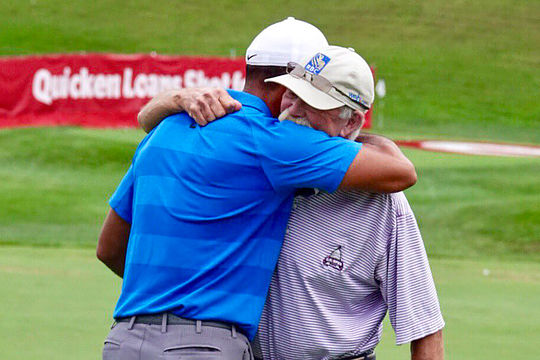 Fluff and Tiger Woods hug it out at the Quicken Loans National (Credit: PGA Tour)

Although the pair parted ways not long after securing Tiger’s first major championship, Fluff has since made more than a good living out of caddying for 2003 US Open champion Jim Furyk.

And Woods? Well, he has done OK for himself as well with first Steve Williams and now his old college mate Joe LaCava carrying his golf bag.

Fluff broke the ice when he was up to an old tricks when he encountered Woods on the practise range at last week’s Quicken Loans National tournament at TPC Potomac at Avenel Farm.

Just like old times, Fluff approached Tiger and nonchalantly threw a golf ball for Woods to catch, which he did with a big smile on his face.

After catching the ball, Fluff and Tiger met in a warm embrace which shows there is still a friendship that has endured long after the player-caddy relationship soured.