Tiger Woods shares the second round lead of the US Open with fellow Americans Jim Furyk and David Toms at 1-under-par, two strokes ahead of four players including first round leader Michael Thompson and the 2010 US Open champion Graeme McDowell.

Woods is seeking to end a four-year major drought with a 15th major golf title and birdied three of five holes on the back nine to move into a tie with Toms and Furyk. 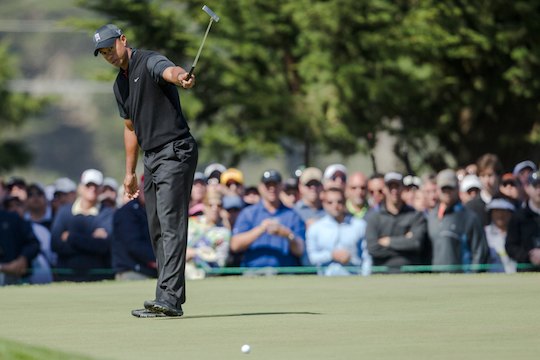 Tiger Woods watches his putt for birdie on the 10th green during the second round at the 2012 US Open (Copyright USGA/Steve Gibbons – Courtesy of www.usga.org)

Following a near flawless opening-round 69, Woods finally felt Olympic’s wrath with the former world number one at times showing frustration with the fast and fickle fairways, which had most of the field hacking out of rough and digging into sand for shots.

“This golf course is just so tricky out there. It’s so fast. You’re hitting such different clubs off the tees, that’s what’s the hard part.”

“Also, they moved up a couple tees and I had to change my game plan a little bit, and then I hit a couple drivers down there, which on a hole, one hole I haven’t hit driver all week.”

“It worked out okay. But it was just a different golf course than what we played yesterday.”

While Woods holed a putt from about two metres on the third hole to momentarily take the lead, Olympic was ready to strike back.

Woods put his approach in the bunker on the fifth and pushed his putt from about a metres for bogey. On the sixth hole his approach landed in the thick rough on the down-hill slop around a bunker.

Woods hacked out of the grass with a choked-up grip, putted with a 3 wood from the fringe and dropped another shot. He also landed in the bunker on the short par-4 seventh and three-putted a third straight bogey.

The difference between Woods and everybody else during today’s second round is that he rallied back.

On Olympic’s back nine, Woods secured birdies on the 10th and the 13th for a bogey free home run, his display of pure determination and skill showing how Woods can rise to the occasion when the pressure is on.

Furyk, the 2003 US Open champion, had carded a 1-under 69 earlier in the day to add to his opening 70. David Toms fired rounds of 69-70 as he searches for his second major a decade after winning the 2001 PGA Championship at Atlanta Athletic Club. 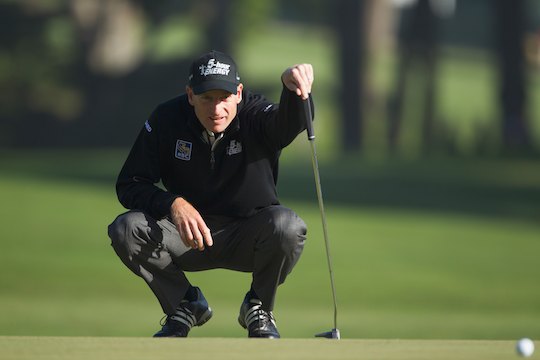 Jim Furyk eyes his shot on the ninth green during the second round at the 2012 US Open. (Copyright USGA/Jed Jacobsohn – Courtesy of www.usga.org)

“I feel great about the 69. I kept the ball in the fairway pretty well. I hit a bunch of greens this week and could probably get a little better with my speed on my mid‑range putts, on my makeable putts.”

“But I feel solid and in control so far, so I know obviously it’s going to get even more probably firmer and faster and even more of a stern test for the weekend. So get some rest this afternoon and get prepared for and try to envision what the course may play like and get prepared.”

Defending champion Rory McIlroy needed to shoot a low score to make the cut after opening the tournament with a 77, yet the 23-year-old fell further behind after carding a 3-over-par 73 to finish at 10-over-par to miss the weekend.

What a difference for McIIroy after a year of fame, money and hype. He has been touted as the next best thing to emerge from the so-called end of the ‘Tiger era’. And while that may turn out to be true, Woods is very much looking to keep the end of the ‘Tiger’ era at arm’s length.

The precise difference was 19. That’s how many more shots McIlroy had through two days at Olympic to what he shot last year at Congressional Country Club. 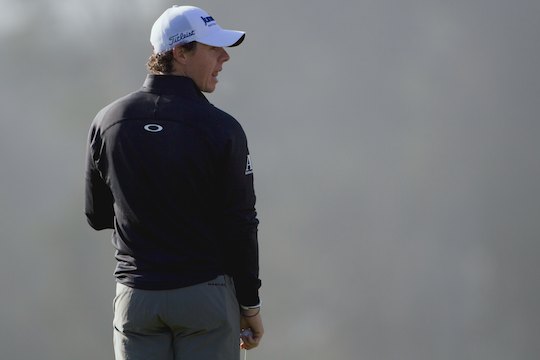 Defending champion Rory McIlroy would miss the cut at the US Open at 10-over-par (Copyright USGA/Jed Jacobsohn – Courtesy of www.usga.org)

“I’m obviously disappointed. It wasn’t the way I wanted to play. I left myself with a lot of work to do after yesterday’s round, and to be honest overall I don’t feel like I played that badly for the last two days.”

“It’s just such a demanding golf course and just punishes the slightest shot that’s off line or that’s maybe not the right distance or whatever and that’s how I feel.”

What happened to McIlroy in San Francisco is proof again of just how competitive the modern tour has become and just how good Tiger actually is.

With its dips and twisted fairways and notoriously fast greens, Olympic is a thinking man’s course. It’s no coincidence the four US Opens played at Olympic were won by men over 30. The runner-ups were also over 30.

Woods at the ripe old age of 36, fits right into the equation, Mcllroy at 23 doesn’t – yet.

World number one Luke Donald, playing in the same group as McIlroy, also missed the cut after finishing at 11-over-par. The Englishman shot a respectable second round 72, but blew his chances on the first day when he signed for a 79.

Dustin Johnson was another casualty, finishing at 9-over-par with rounds of 75-74 to miss the weekend by a stroke along with US Masters champion Bubba Watson who finished also at 9-over-par after rounds of 87-71.

Crowd favourite and television ratings puller, Phil Mickelson, jumped forty-two places with his second round 71, after opening with a 76, to make the weekend at 7-over-par and in a tie for 51st position.

Alistair Presnell is the best of the five Australians in a tie for 18th position at 4-over-par after rounds of 70-74. The 2009 Moonah Links champion is currently five strokes from the leaders and looking every part a championship contender despite this being his first major.

John Senden is a stroke behind Presnell at 5-over-par after rounds of 72-73 in a tie for 29th.

Jason Day and Adam Scott are in a share of 42nd position at 6-over-par, with Day carding rounds of 75-71 and Scott shooting rounds of 76-70.

Rod Pampling is the final Australian to be playing the weekend finishing at 7-over-par, a stroke within the 8-over-par cut mark of the lowest 60 scores plus ties.