Woods has work to do after Royal Portrush first look

Tiger Woods clearly has plenty of homework to do ahead of the 148th Open Championship at Royal Portrush.

Woods was joined by fellow American Patrick Reed with the duo taking to the Northern Ireland course on Sunday around 9.30am local time. 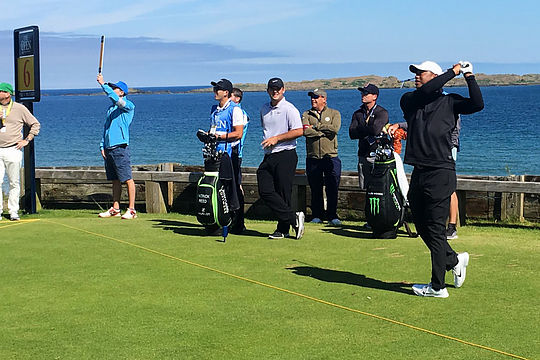 Woods tees off during his Sunday practice round (Credit: Twitter)

It wasn’t long before those spectators on the course flocked to the Mastesrs-winning pairing and while it was warm sunshine, Woods was bizarrely wrapped-up under three layers.

Once he made his way up the first hole, the 43-year old was clearly struggling to get into full stride.

Woods jetted in overnight from Florida in what is his first visit to Northern Ireland in 19-years when he played a practice round here in the week prior to the 2000 Open Championship at St. Andrews.

The World No. 5 last competed on tour at last month’s US Open at Pebble Beach where he finished in a tie for 21st.

“I’ve not played since Pebble,” he said in speaking with Bob Harig from ESPN.

“I didn’t play any golf and the clubs stayed in the travel case, like I told you guys, I wouldn’t touch them. I didn’t do a damn thing. I putted as soon as I got back and then built it up from there.”

“We had the greatest time as it was also Sam’s birthday was over there. We rode elephants, went on a safari, visited the islands. It was an experience. Especially since my mom’s health is diminishing and we’re not sure how many times she can do this.”

“They understand the culture there a little bit more, the things they didn’t really know about. It was pretty cool for them to experience that at such a young age.”

Woods and Reed played all 18 holes before ending their practice rounds soon after 1pm local time.

Woods had been reported as seeking to acclimatise for this week’s event by setting his alarm for 1am Florida-time and what is 6pm UK time.

However while Woods’ physical well-being was clearly not at 100%, it did not seem to hamper him once over a shot and after his first practice round on the course, Woods knows still has much homework to do ahead of Thursday’s tee-off.

“There’s a lot of movement and a lot of decision off the tees, angles,” he said.

“With the wind switching and coming out of the south in the future, a lot of these shots we hit today are useless. Trying to figure out what lines to take, what lines to take on, what lines not to take on. And then these green complexes are so complicated, you have to miss the ball in the right spot.”

And while Woods has three full official practice rounds to work out the course, word is fellow Open winner, Darren Clarke, will be given the honour of teeing-up first at 6.30am on Thursday morning.

Clarke, winner of the 2011 Open at Royal St. Georges, has a house within minutes of the Royal Portrush front gates.

When asked if he was being handed the honour Clarke simply smiled saying: “You are going to have to get up really early if you want to catch me teeing up.”