Woods kicks off Carnoustie return with practice round

(Carnoustie, Scotland:) While it was only a practice round, it was the first signs that Tiger Woods is all set to end an 11-year absence when he tees-up in this week’s 147th Open Championship on Thursday.

The last time Woods has seen Carnoustie was in finishing T11 in the 2007 Open. 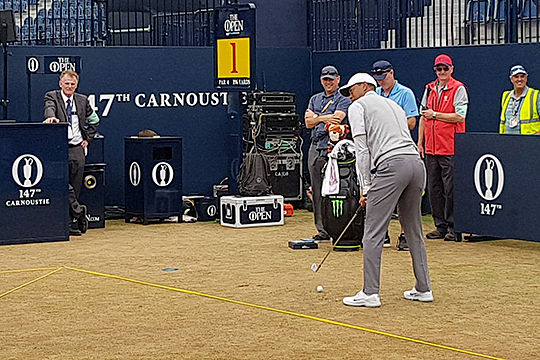 And the 14-time Major winner was keen to get an early look at the Scotland course teeing-up around 3.40pm and hitting off the first.

“I have missed playing in The Open a lot because it is our oldest tournament and coming here to Carnoustie is just special,” said Woods.

“It’s right in front of you. It’s hard and probably the most difficult one we play in the whole Open rotation.”

Woods spent only 20 minutes on the range warming up before making his way to the tee and using an iron to find the opening fairway.

He played just eight holes and used his driver only once ahead of his first official practice round in the morning (7:10am) alongside Justin Thomas.