Woods leaves Bridgestone with back spasms

Tiger Woods has withdrawn from the World Golf Championships Bridgestone Invitational midway through the final round with a back injury putting his place at this week’s PGA Championship and his Ryder Cup selection into question.

Whilst the golfing world will gather at Valhalla, Kentucky this coming week – the place where Woods won a playoff for the USPGA in 2000 – it’s uncertain whether Woods will tee it up on Thursday. 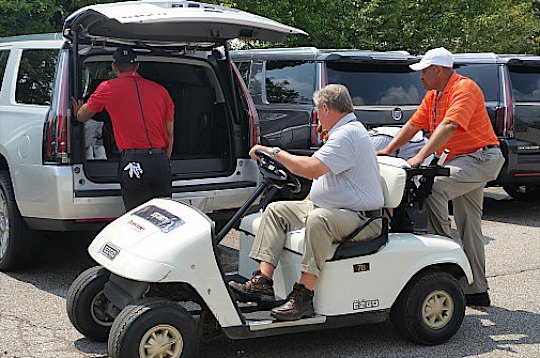 Tiger Woods left in his courtesy vehicle shortly after re-injuring himself at the Bridgestone Invitational (Credit: Bernie McGuire)

It all went wrong on the second hole at Firestone.

Woods had begun with a birdie and looked set for a stellar final round but a stray drive left him in an awkward spot with his ball nestled on top of a fairway bunker.

A difficult stance coupled with thick rough saw Woods lose his balance and then jump back into the sand trap.

“I fell back into the bunker I just jarred it, and it’s been spasming every since,” said Woods in the car park before getting gingerly into his vehicle. “It’s just the whole lower back.”

He said his back felt progressively worse after that shot on the second. His approach shot on No. 3 landed in the water, which led to a bogey. Poor drives and uncharacteristic approach shots littered the next six holes, indicating something was drastically wrong with the 14-time major winner.

The defending champion and eight time winner at Firestone was three-over par through eight holes on the final round and four-over for the tournament after shooting 68-71-72 the first three days.

Woods then withdrew at the 9th hole citing back spams, walking slowly from the ninth tee to a courtesy car to take the former world No. 1 to the car park.

Woods, 38, was playing in his third event since returning from microdiscectomy back surgery earlier in the year to repair a pinched nerve.

At present he’s scheduled to be playing Valhalla Golf Club on Monday afternoon in preparation for the final major of the season.

“I don’t know,” Woods said when asked about next week. “I’m Just trying to get out of here.”