Tiger Woods exacted revenge on long-time rival Phil Mickelson when the reigning Masters champion teamed up with Peyton Manning to win 1up over Mickelson, who joined Tom Brady in ‘The Match: Champions for Charity on a rainy Sunday afternoon at Medalist Golf Club at Hobe Sound in Florida.

In conditions more akin to playing links golf in Ireland or Scotland the four superstar sportsmen braved the awful Florida spring weather for Woods and Peyton to hold on to win 1up at the final hole.

And it was a tribute to organisers that a massive $20 million was raised for COVID-19 relief in the US…$10 million more than expectations.

Some 18-months ago, Mickelson beat Woods in a play-off in a winner-take-all $9 million purse in Las Vegas.

After last week’s ‘Sunday at Seminole’, the Match at the Medalist Club added the extra flavour of two of the greats of NFL in golf-mad Manning and Brady.

The Medalist Club is a mirror of Seminole in that it’s an ultra-exclusive, near impossible to access golf club. 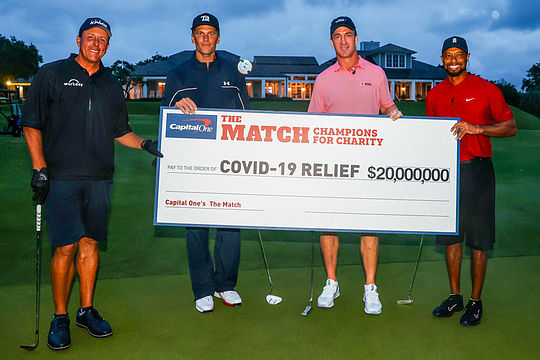 For Woods, the course is his ‘home’ track but no-one was expecting the poor weather that worked hard to spoil the ‘made-for-tv’ showdown on Memorial weekend.

Also on course was another Medalist member in Justin Thomas, who was acting as an on-course reporter for the day although ‘JT’ is clearly better with a golf club in his hand than a microphone.

Woods and Manning jumped to an early 3up lead but it was Brady, a six-time Superbowl winner, who stole the individual honours for the day.

After relentless heckling from basketball legend and match commentator, Charles Barkley, Brady found the bottom of the cup from the fairway for a birdie ‘4’ at the par-five 7th hole.

The six-time Superbowl champion’s form on the opening nine had gotten so bad that Koepka said he would donate $100,000 if he could just make a single par before the turn.

Mickelson then pulled off the drive of the event in sending a massive ‘bomb’ off the tee at the makeable dog-leg par-four 11th hole to leave Brady with a putt for two.

“That’s a high nasty straight bomb. That is salty. You can feel (momentum) is changing. That’s how I roll…I’m all or nothing,” said Mickelson.

After much advice from Mickelson, Brady holed the eagle putt for a ‘2’ to take the team to within two shots of Woods and Manning.

They were gifted a win a the 14th hole after Manning missed an easy par putt, putting Mickelson and Brady back to 1down.

As the foursome came to the final hole, Woods and Manning enjoyed a slim 1up lead and would need something special to keep the game from heading into extra time.

The pair were able to hold off Mickelson and Brady to secure a win and leave Mickelson and Woods at one a piece in The Match series so far.

“Phil said he was nervous. I know Tom and I were comparing notes,” said Manning.

“To be behind the ropes in these guys’ worlds, to be in the arena with them, it was really a special experience. I was not comfortable the entire time.”

“Knowing $20 million was raised and helping people going through tough times, it was an honour to be invited. It’s something I’ll always remember.”

With both charity matches now over, the next stop on the PGA Tour will be the long-awaited Charles Schwab Challenge on June 11.