The 18-hole, head-to-head match between Tiger Woods and Phil Mickelson has been officially confirmed and will take place on Thanksgiving Weekend (Nov. 23rd) in the US.

The pair, who hold 19 majors and over 120 PGA Tour wins between them, will line up against each other in ‘The Match’ at the picturesque Shadow Creek in Las Vegas with the all-or-nothing winner taking home US$9 million. 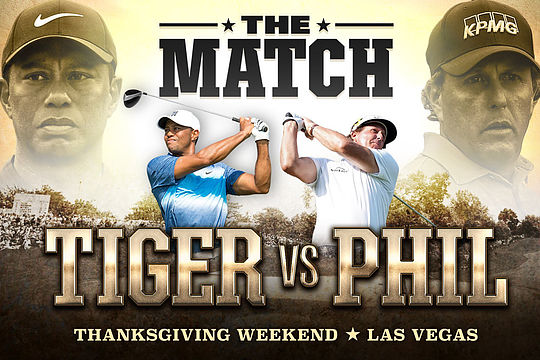 Alongside the multi-million purse, both players will be taking side-bets with all money raised going to the player’s nominated charity.

“For instance, Woods or Mickelson could raise the stakes by challenging the other to a long-drive, closest-to-the-pin or similar competition during a hole as they play their match, with money being donated to the winning golfer’s charity of choice,” read the press release.

“It allows us to be a little bit more real, if you will,” said Mickelson. “We think there will be some pretty good interest, but we’re also trying to present it in a way that you don’t get to see with normal TV.”

When quizzed about the decision to only air the event on pay-per-view TV, Woods was adamant that the (as yet unannounced) pricing would be affordable for most fans.

“I think they can afford it and I think it will be done differently,” said Woods said following his opening round at the Northern Trust.

“You know, how many times have we all purchased fights. Whether it’s MMA or it’s boxing, whatever it may be. We all purchase those fights.”

If the reactions at the recent PGA Championship are any indication, the Woods fans alone will ensure this event is financially viable. Throw in to the mix, the 20-year rivalry between the two players and this is shaping up as one very exciting event.