(Augusta, GA:) Tiger Woods has played down any potential news grabbing headlines as the ‘Biggest Comeback’ in sport should he win the Masters starting later tonight.

Woods is returning with his golf clubs to the Masters for the first occasion in three years and with many punters prepared to back the now 42-year-old as favourite to win a fifth Augusta green jacket.

But when quizzed on the subject of comebacks, Woods singled out the heroic efforts of Ben Hogan who in early 1949 was involved in a near fatal car accident.

Hogan had already won four Majors prior to the accident and returned to competition a year later to go on and win a further five Majors including Masters wins in 1951 and 1953. 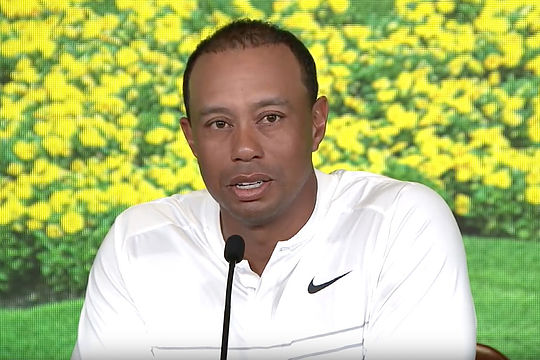 Hogan then won the ‘Grand Slam’ later in 1953 with his first and only Open Championship success.

“Well, I have four rounds to play, so let’s just kind of slow down,” said Woods.

“I’ve had anticipation like this prior. If you remember the build‑up was from the PGA of 2000 to the Masters of 2001, nine months of building up, what that tournament would mean. And it’s the same thing.”

“I got to go play and then let the chips fall where they may, and hopefully I end up on top. But I got a lot of work to do between now and then.”

“I mean, he got hit by a bus and came back and won Major Championships.”

“The pain he had to endure, the things he had to do just to play, the wrapping of the leg, all the hot tubs and just the ‑‑ how hard it was for him to walk, walk period, and he ended up walking 36 holes and winning a US Open.”

“And that’s just ‑‑ that’s one of the greatest comebacks there is, and it happens to be in our sport.”

Woods is clearly in good spirits having played a Tuesday practice round with newfound good friend, Phil Mickelson and taking the ‘mickey’ out of Mickelson in wearing button-up dress shirt in practice.

“I always give Phil a little bit of grief about that,” said Woods smiling. “The only thing that was missing was a tie.”

“I think Phil and I have ‑‑ we have been through it for so long and we have been together on these teams long enough, and then when I got hurt and I had to take a different role on the teams, being assistant captain and really trying to help out on the side, how best I possibly could, Phil was great.”

“And our friendship has gotten stronger over the years. We have competed a lot of times coming down the stretch in events.”

“And I think it’s just age as well. We’re at the tail end of our careers, we both know that. He’s 47, I believe, and I’m 42, and we have had a great 20‑year battle, hopefully we’ll have a few more, but we understand where we are in the game now versus where we were in our early 20s, battling for who is going to be No. 1, and that was then and certainly this is now.”