Woods was in a relaxed mood today as he spoke to the media ahead of the start of the 142nd Open Championship at Muirfield.

The three-time Open champion seemed more at ease than at any time since he burst on the scene by winning his first of 14 Major titles at the 1997 Masters tournament and adamant the elbow injury that had troubled him at last month’s US Open was a thing of the past.

The world number one has not won a Major since his play-off victory against Rocco Mediate at the 2008 US Open but that long drought seems to have done nothing to diminish his confidence.

“I feel very good about my game,” a smiling Woods told his inquisitors in the media centre.

“I’ve had a pretty good year so far; won four times. Even though I haven’t won a Major Championship in five years I’ve been there in a bunch of them where I’ve had chances.

“I just need to keep putting myself there and eventually I’ll get some.”

Woods puts his barren run down to bad luck rather than a serious problem with his game.

“I think it’s just a shot here and there,” he said. It’s about making a key up-and-down here or getting a good bounce there. For instance, this year at Augusta was one of those examples.”

“It’s about turning that tide and getting momentum. It’s about capitalising on opportunities. That’s what you have to do to win Majors.” 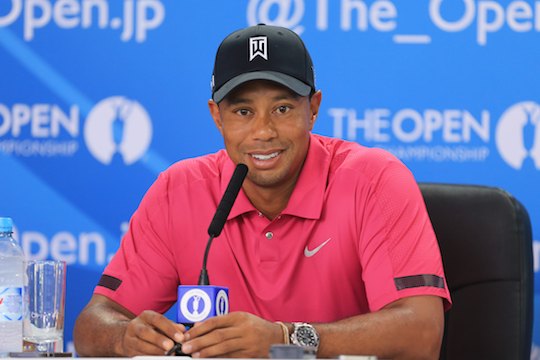 Tiger Woods speaks to the media prior to the 142th Open Championship at Muirfield (Credit: Fran Caffrey/www.golffile.ie)

Woods recorded his worst round as a professional when he ballooned to an 81 in the gale force wind and driving rain that swept over Muirfield during the third round in 2002 but that episode has done nothing to diminish the American’s respect for the course.

“It’s one of the best venues. I mean you have to hit the ball well here. You have to be able to shape your shots. It’s no coincidence that so many Hall of Famers have won here.”

“It’s a bit like Merion in that respect. You have to be a good ball striker. You have to be able to shape it both ways and really control your shots. It’s not like St Andrews or Troon where it’s straight out and straight back.”

The weather forecast suggests that playing conditions will become increasingly hard and fast as the week progresses and that is exactly how it was when Woods won over a parched Hoylake course in 2006.

On that occasion the American used just one wood all week and it would be no surprise if he was to employ a similar tactic here in East Lothian.

“I’ve used a lot of irons in practice,” he admitted.

“The course has a bit of speed to it. This golf course is playing similar to that (Hoylake). It’s quick. On some of the holes a 4-iron has been going 280 yards.”

“It could change but at the moment it’s fast and it’s going to be all about controlling the run as best as you possibly can.”

“That’s the neat thing about links golf,” he added.

“I love this Championship. I just think it’s neat to play this type of golf. There are only certain places in the world where we can. Here and probably the Aussie sandbelt courses are the only places where we can play true links golf.”

“I fell in love with it 17 years ago when I first came over here. My introduction to links golf was Carnoustie at the Scottish Open and St Andrews on back-to-back weeks and that’s about as good as it gets.”

“It’s neat. I just absolutely love it,” he added before heading back to the practice ground to complete his final preparations.