Day two of the Turkish Airlines World Golf Final saw pressure on Tiger Woods and world number one, Rory McIlroy to get a point for a win.

Woods comfortably defeated Kuchar by 5 shots with a 4-under 67 after enjoying a 3 stroke lead after 15 holes. 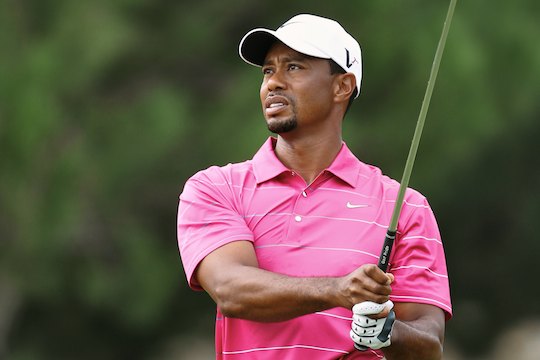 Unlike yesterday, Woods had no issues with yardage on the final hole. He hit his approach to 3m on the par 4 18th to make birdie and set himself up for a tilt at a semi-final birth.

McIlroy could only go forward after yesterday’s troubled 5-over-par round.

Coming down the final hole he was one shot behind Charles Schwartzel and needed a two shot swing to get up. His approach shot was just off the green to a back pin.

Schwartzel was on the green and would make par at worst. McIlroy’s chip in for birdie gave him two minutes of hope that he would salvage half a point for a draw. It was not to be, as Schwartzel grabbed a birdie. Schwartzel carded a 1-under 70 whilst McIlroy was one shot back.

The best round of the day belonged to Webb Simpson with a 6 under par 65, to defeat Hunter Mahan, who was just two shots off Simpson’s hot pace.

Westwood led at the turn by one stroke thanks to an eagle at the short par 5 7th hole. Westwood fired his approach to within 3m from 190m out.

Play finished just one hour before a severe thunderstorm struck. At 2pm it was announced that there would be no further play for the second round.

The final round robin matches would commence at 8am on Thursday ahead of the semis in the afternoon.

The players yet to score are Mahan and McIlroy.

The scoring system will produce ties. If more that 2 players are on the same score the ties are decided by lowest aggregate score. That being the case McIlroy is virtually out of contention being 5 over for his two rounds.

If two players are tied the player who won their respective round robin clash is superior.