Winning for the 80th time became even more significant for Tiger Woods when he checked his mailbox recently.

The former long-running world No 1 was pleasantly surprised when a gleaming new putter was delivered to his door. 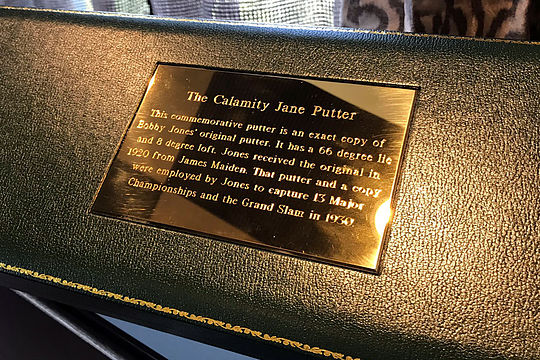 Not that it is one that will ever see a golf course.

No, this was a replica of one of the world’s most-famous ever putters, Calamity Jane, which golfing great the late Bobby Jones used with such dexterity in many of his wins.

The putter was part of Wood’s prize for winning the Tour Championship in Atlanta shortly before he joined the US team as they headed for France to compete in the Ryder Cup.

And Tiger was quick to let the world know how satisfied he was with his ‘prize’.

“Look what just came in the mail today,” revealed Woods on Instagram.

“Thank you to everyone for making number 80 so special.”

Of course the Tour Championship was played at East Lake, the Atlanta course where Jones was famously first introduced to the game.

It was certainly a special victory as Woods broke a five-year winless spell with his sensational win in the Tour Championship.

“It’s still sinking in, because 80 is a big number,” Woods said.

“What validates it for me is the fact that I got a chance to go against Rory (McIlroy) head to head in the final group, and also (Justin Rose), who was tied with Rory, a group ahead.”

“In order to get my first win in five years I had to beat those two guys. That makes it feel even more special.”