Tiger Woods will take his first steps back into competition after February’s near-fatal car smash when he joins son, Charlie in next week’s PNC Championship in suburban Orlando.

As reported earlier this week, organisers were holding a spot open for Woods and his now 12-year-old son, Charlie after the 15-time major winner hinted at last week’s Hero World Challenge that he and his son may play the 10-team event. 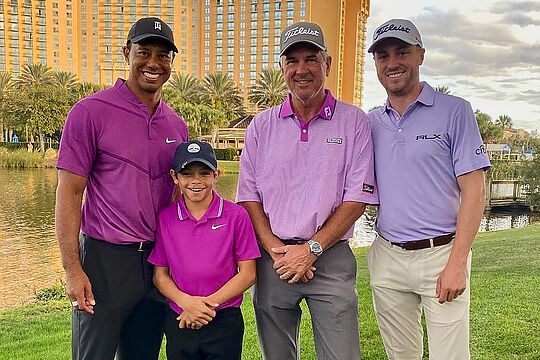 Woods’ last competitive showing before his horrific car smash was at the same Orlando event a year ago when father-and-son gelled superbly to post a ‘better ball’ score of 62 on the final day to grab a share of seventh place on the host Ritz Carlton course.

In confirming next week’s attendance Woods said: “Although it’s been a long and challenging year, I am very excited to close it out by competing in the PNC Championship with my son Charlie.”

“I’m playing as a Dad and couldn’t be more excited and proud.”

Woods posted news of his return to competition on his Twitter account with some of the first of hundreds of messages being from those who administer the game.

“Welcome back! Can’t wait to see you and Charlie play,” posted the USGA.

And from @PGA of America – “Awesome news. Can’t wait to watch you Champ W” with Bryson DeChambeau adding, “That’s awesome. Welcome back.”

Fellow PGA Tour pro Max Homa summed it up the best: “Tiger is so cool. What a machine. In the same year I thought it would be a minor miracle if he could ever walk again, he’s playing competitive golf on TV. Legend”