Tiger Woods celebrates the 25th anniversary of his maiden Masters appearance singling out the Augusta National patrons who helped carry him last year to a fifth Masters green jacket and a 15th Major.

Woods was aged just 19 when he made his debut in 1995 as a then amateur and managing to play all four rounds to share 41st place.

He teed-up in the 1996 Masters, his first as a pro, amid enormous hype and expectation only to miss the halfway cut.

Twelve months later, Woods rewrote the Masters record books running away with a 12-shot victory and as CBS TV remarked at the time: “A win for the ages”.

Then for the first time in his career last year, Woods came from behind over the final day to end a nine-year Majors victory drought in posting a last day 70.

And with the continuing COVID-19 pandemic ruling out the presence of Augusta patrons, Woods spoke of the support of the patrons some 14 month ago that helped him to victory. 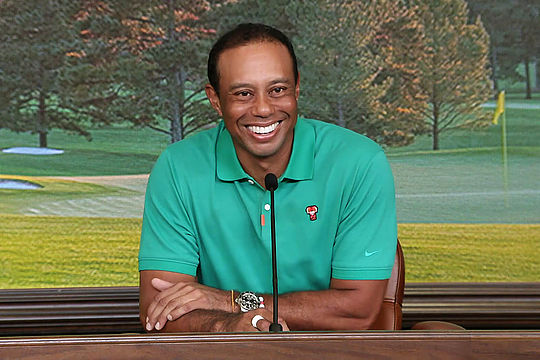 “The patrons absolutely they did. They helped me win. The support that I had, the energy that was around the property, it was electric that day,” said Woods.

“We all miss the energy of the crowds. And yes, this year is going to be very different. It’s going to be stark in what we see, our sights into the greens, the energy that you hear from different roars, from different parts of the golf course. I mean, you’re on the putting green up on 1 and you can hear eagles down on 13.”

“That’s what this tournament is all about, and we’re not going to have that this year. It’s going to be very different. It’s one that none of us have ever experienced.”

“So, we’re all going to go through it together at the same time and it’s going to be a very different experience, and you know, hopefully one that I can figure it out and be able to replicate what I did last year.”

And while Augusta has stopped the presence of patrons and also cancelled the ‘Par-3 Contest’ and closed the merchandise outlets, there was one Masters tradition going ahead and that was the ‘Former Champions Dinner’ albeit with strong social-distancing measures in place.

Woods, as dinner host for the fifth occasion in his career, spoke of his memories in having attended 22 past Champions Dinners.

“To see Gene Sarazen and Sam Snead, and drinking milkshakes, that was awesome,” said Woods smiling.

“Just to hear the stories of all the guys over the years. The stuff that we say in the dinners stays between us, and that’s the most awesome part about it is we keep it in house and keep it within the family.”

Brought on by the decision to move the event to the autumn, there will also be a rare first this year – a two tee start for the opening two rounds.

“It’s never been done before,” as Woods rightly pointed out. “I think when Jack finished in his last Masters, he had to tee off on 10 and finished coming up nine.”

“You know, this whole year has been very different for all of us. For us to be able to have the ability to have this event and play this event early in the year, we weren’t looking like we were going to have this opportunity.”

Woods will play the opening rounds in the company of reigning Open Champion, Shane Lowry and 2019 US Amateur champion, Andy Ogletree, a 22-year old from Mississippi.