(Torrey Pines, CA:) Tiger Woods is guaranteed his first Tour cheque in some 30 months after a fighting inward half to make the halfway cut by just one shot at the Farmers Insurance Open at Torrey Pines.

Woods went into the second round following a level par 72 and clearly still struggling with the driver in a round of a one-under par 71 for an eventual one-under par tally.

It left Woods trailing 10 shots behind fellow American Ryan Palmer, who added a 67 to his opening 66 to lead by a shot at 11-under par from defending champion, Jon Rahm with scores of 68 and 66.

Rahm, who can go to World No. 1 with a second straight victory, birdied two of his closing three holes.

“I fought hard to post the number I needed, but it was fun to be out there competing again,” Woods said.

“Fighting like that is something I have done my entire career. I had to hit some really good shots on that back nine, and I did that.” 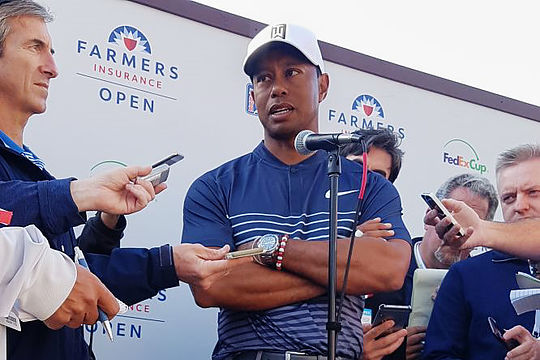 Tiger Woods talks to the media after his second round (Credit: Bernie McGuire)

“It’s been a long 12 months battling back from the surgery, and I’m still trying to get my feel back. It’s one thing to hit shots in practice – you are going to hit them further with the adrenaline going, and I am still learning how much further.”

It is the first occasion Woods has made the cut in a regular Tour event after finishing 10th at the 2015 Wyndham Championship in North Carolina.

Twelve months ago, Woods looked nothing like the player who had won seven Farmers Insurance Open titles and the 2008 U.S. Open winner on the Torrey Pines layout, with a clearly far-from-fit Woods missing the cut with scores of 76 and 72.

Less than a week later, he withdrew ahead of the second round of the Dubai Desert Classic citing back spasms.

But that all now seems to be in the distant past with Woods, and despite plenty of errant driving, getting back to his best with every round he now plays.

He had a huge spectator following ducking for cover right from the outset with a wild drive left that came to rest close to the event Media Centre and located between the first fairway of the South Course and the 10th hole of the North Course.

Woods was afforded a near 20-step ‘free drop’ to the right of the centre on route to saving par on the North Course.

He missed a 10-foot birdie at par-3 12th hole, or the third of his round, and then had to take a penalty drop with another errant tee shot into bushes left of the 13th on route to a double bogey ‘6’ that sent him back to two-over.

Woods had the spectators right of the 14th also covering their heads with his wayward drive before ending the outward nine at two-over.

An almighty roar, and the like not heard on the PGA Tour for some time, erupted when Woods grabbed his first birdie on the day, holing a monster 50-foot putt at the first hole of the course and the 10th of his round.

Woods then had his fans at fever pitch with birdies at his 14th and 16th holes before delivering a silence in dropping a shot at his 17th for bogey.

However a birdie at his last, where Woods again produced a wayward drive before finding the green in two, saw him two-putt for birdie and his score of 71.

“All I was trying to do over the last few holes was to get under par for the day,” he said.

“I thought that would be a good solid tornament from being 2-over at the turn. If I could somehow post under par for the day, it would be good work and I was able to get there.”

“But it was a grind, I fought hard. Typical, you know, just me going out there and fighting for whatever I can get.”

“My short game’s been good all week, so that part’s been good, solid. The thing is I have been away from the game for a couple of years, so it’s nice to get out there and just compete again.”

“Now that I’ve made the cut, hopefully I will be able to compete and keep building.”

The two days at Torrey Pines has been like Tiger-mania all over again and well over 20-years after Woods set golf’s stage on fire in winning his first Major by 12 shots at Augusta National.

Woods has clearly attracted a new army of supporters as he delighted dozens of those youngsters in signing his autograph following his post-round media commitments, many of whom weren’t even alive when Woods claimed that first major title all those years ago.