Tiger Woods has rocked the golf world coming out seemingly in support of a breakaway Premier Golf League declaring it to be a ‘natural progression’.

The proposed Premier Golf League has already sent the golfing establishment into a tail spin with both the head of the PGA Tour and European Tour’s despatching emails to their indiviual members supposedly outlining the restrictions that will be put in place should the world’s best choose to leave their respective tours. 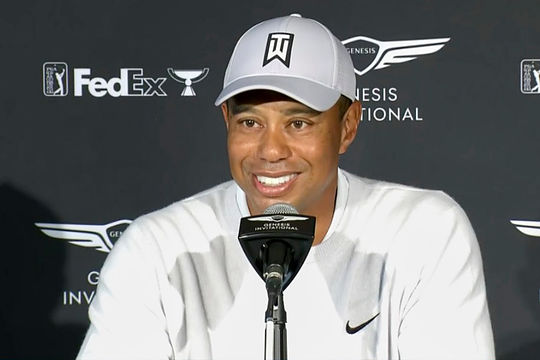 Woods was asked ahead of hosting this week’s Genesis Open whether he has been approached by Premier Golf League representatives, which are believed to be Saudi Arabian golf officials as was evident last December when his manager was seen chatting with the head of Saudi golf at the Hero World Challenge in the Bahamas.

“Have I been personally approached? Yes, and my team has been aware of them and we have been trying to delve into it and trying to figure it all out like everyone else,” said Woods.

“We have been down this road before with the World Golf Championships and other events been started or other tours wanting to evolve and start.”

“There is a lot of information that we are still looking at whether it will become a reality or not.”

The Premier Golf League is believed to be proposing a mega-millions 18-event series, featuring at least 10 events in the US and commencing possibly in 2022 that will feature the world’s top-48 ranked golfers.

The major question facing the likes of Woods, Rory McIlroy, Brooks Koepka and any of those who do choose to abandon the PGA Tour and sign for the Premier Golf League what will be their stature when it comes to teeing-up in the four Majors, the three WGCs and what will transpire should any player drop outside the world’s top-48.

Woods was then asked if he felt ‘there was something not right’ that there should even be talk of establishing a breakaway tour.

“When you look at all events you are trying to get the top players to play more collectively and it is one reason why we instituted the World Golf Championships because we were only getting together five times a year at the four majors and the Players,” said Woods.

“We wanted to showcase the top players on more than just those occasions so that’s why we came up with the World Golf Championships.”

“So, this is a natural evolution as things like this are going to happen whether now or in the future.”