Tiger Woods put himself in a commanding position in a wind-swept second round of the US PGA Championship being played at The Ocean Course, Kiawah Island.

Woods, seeking his fifth US PGA title, overcame the wild conditions to fire a 71 to be at 4-under-par and in a share the lead with Vijay Singh and Carl Pettersson.

Tiger Woods smokes his three wood down the 8th hole during the second round of the US PGA Championship (Photo: Anthony Powter)

The strong gusts, together with heavy rain overnight made for challenging conditions with the 77.9 average scoring round the second highest in the tournament’s history and the highest at a major since the 2004 US Open.

“It was tough out there, wow,” said Woods.

“It was hard staying steady and a couple of times I was getting blown. It was fun, but it was also tough because you were getting blown all over the place.”

But while the majority of the field struggled, Woods embraced the elements, cautious of the fickle conditions and challenging layout. 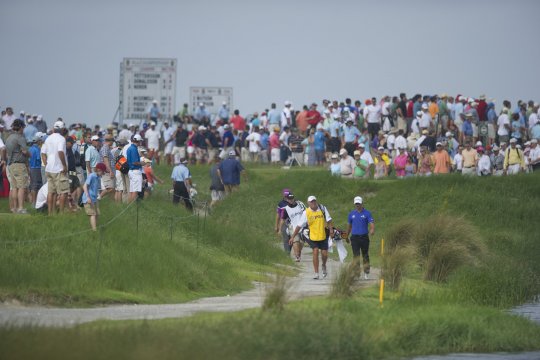 Adam Scott walks down the 17th at The Ocean Course during the second round of the US PGA Championship (Photo: Anthony Powter)

“You can’t take anything for granted, simple tap‑in is not a simple tap in.”

For the third consecutive major championship this year, Woods is in or near the lead after two rounds.

“Well, I’ve been here before,” said Woods regarding his chances of claiming his 15th major and first since the 2008 US Open.

Should Woods be holding the championship trophy on Sunday afternoon he will also claim the world number one ranking from Luke Donald.

Yet Woods remains cautions about what lies ahead given the challenging nature of this course and the havoc that can be created by the weather.

“You know, I’ve been in this position many times over my career, and again, we are just at the halfway point.”

“We have a long way to go. I don’t know the forecast, I haven’t looked at the forecast for tomorrow, but if it’s anything like it was today, it’s going to be tough.”

“But I’m pleased. Anything under par today is very good, so I feel very confident.”

Singh, 49, conceded they may have been the most difficult conditions he had ever played in.

“I don’t think we can handle this for three more days,” said Singh.

Ian Poulter is one shot behind the leaders, while Rory McIlroy is two shots back after carding a 75.

Aaron Baddeley and Adam Scott are just three from the lead after their morning rounds of 75 left them at 1 under and in a share of 7th position.

Scott was generally pleased with his round given the conditions and the added focus as to how well he will respond in his first major since his loss at The Open.

“I think I played pretty well. But it’s very easy to let shots slip out on this golf course. So I think, consider 75 kind of a par round of golf out there today.”

“It’s really very tough. I did a lot of good things. I hit a lot of fairways again. And that makes this course a little bit easier.”

Marc Leishman, Greg Chalmers and Geoff Ogilvy are the next best of the Australians in 24th at 2 over.

John Senden and Marcus Fraser also made the cut with Robert Allenby, Brendan Jones and Jason Day missing the weekend.