(Albany, Bahamas:) Tiger Woods is quietly-confident he could be fit enough to claim victory at the 147th Open Championship at Carnoustie.

Woods still has to successfully battle his way through this week’s long overdue return to golf at the Hero World Challenge in the Bahamas. 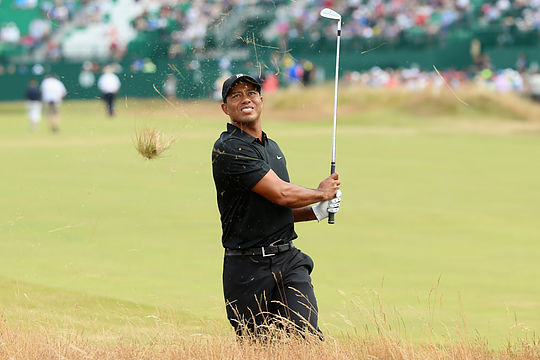 Bizarrely, it is the third year in succession Woods is making the Bahamas event his return to official competition following a long injury lay-off.

And while Woods is focussed on this week’s elite 18-player and no-cut tournament, he expressed delight in being able to hopefully include the 2018 Open in his schedule next year. It has been more than a decade since his 2006 Open victory at Royal Liverpool.

Scotland will always hold a special place in Woods’ heart as he made his European Tour debut in the 1995 Scottish Open at Carnoustie as the then reigning US Amateur and a week later journeyed to St. Andrews to contest his first Open.

“I recall making just one birdie on the weekend and finished three or four out of the play-off.”

“Carnoustie can be a brutal golf course and it was brutal that year. I played when Paddy (Padraig Harrington) won in ‘08 but I just love that golf course.”

“It’s just so tough, but it’s all there in front of you. There are no tricks, there’s nothing hidden.”

“It’s just ‘come get me.’ This one is the by far the hardest of all the courses on the Open rota.”

“I won two of my Open Championship’s in Scotland and one other in England so let’s try and add another one in there.”

Woods is returning to competition for the first occasion since withdrawing ahead of the second round in January’s Dubai Desert Classic and then undergoing fusion surgery mid-April on his spine.