Tiger Woods will square off against Australian Adam Scott and Woods’ ex-caddie Steve Williams in a promoter’s dream match-up on the opening day of the Presidents Cup tomorrow.

Woods will team up with Steve Stricker for the United States against the International team’s Scott and South Korean KJ Choi in the final match of the opening day’s foursomes at Royal Melbourne. 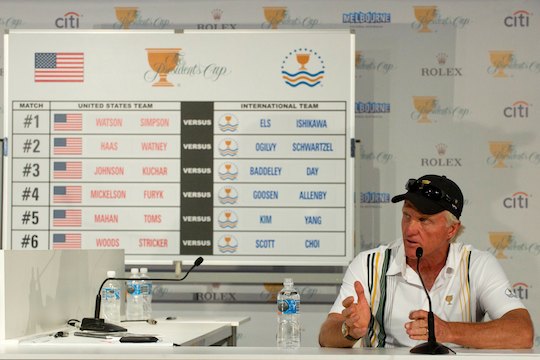 Making the announcement International team captain Greg Norman and his US counterpart Fred Couples insisted there was no premeditation regarding the outcome.

But the match up will guarantee worldwide interest due to the recent controversial comments made by Williams about his former employer Woods.

“It is better to get these things out of the way early,” said Norman.

“Tiger and Adam are good friends. I don’t see this being an issue. It’s great for the tournament – it needed to be done.”

Woods was best man at Williams’ wedding in New Zealand, and Williams had loyally lugged Woods’ bag for 12 years in winning 13 majors and 72 tournaments.

Their relationship ended in July under circumstances yet to be made public.

“It was time to move on,” were Williams’ comments regarding the matter.

Williams’ subsequent statement after Scott’s win in Akron as being “the best win of my career” – despite being on the bag with Woods for 13 majors – placed him back into spotlight for all the wrong reasons.

A racist remark by Williams at an awards dinner put the issue back on the front page. Though Williams issued an apology, people were questioning Scott’s lack of criticism.

“I don’t think anyone condones racism in sport or anything,” said Scott.

“I don’t see it being an issue moving forward. I think from my side of things and my teams, the matter has been put to bed. I’ve got nothing more to talk about it with anyone. So I’m moving on.”

It’s not the first time Williams has run into trouble. Three years ago at a dinner banquet in New Zealand, he made a disparaging remark about Phil Mickelson.

Williams said it was meant in fun, although he later apologised to Mickelson.

Pairings for the opening day foursomes matches include: