Australian Shae Wools-Cobb has fired the second lowest round in the history of the Asia-Pacific Amateur Championship opening with a 8-under, 63, for a four-shot lead at Royal Wellington Golf Club in New Zealand.

Wools-Cobb carded seven birdies and an eagle, his only blemish a bogey on the 367 metre par 4 6th. 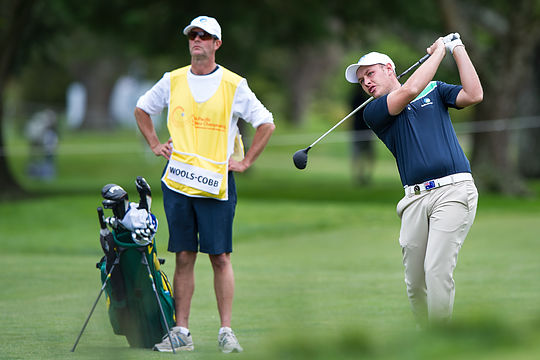 In a day of contrasting conditions, Wools-Cobb took full advantage of an early tee time to record his score. Starting on the back nine, Wools-Cobb was out in 29 courtesy of an impressive eagle on the 497 metre par 5 18th where he nailed a fairway wood from 220 metres to within 8 metres to a tightly tucked pin position on the back left of the green.

“It wasn’t the greatest drive but it was down the middle,” said Wools-Cobb.

“Then I didn’t really know if I wanted to go for it, but I had to man up, and hit 3 wood 20 foot and holed a really nice putt. It was pretty quick.”

Wools-Cobb kept the pedal to the metal over the back nine peppering the pins with precision iron play and consistent putting.

“I had so much fun out there and it was pretty stress free,” said Wools-Cobb. “So I really enjoyed my day and yeah, hopefully I can do much the same the last three rounds, as well.”

Wools-Cobb’s 63 doesn’t qualify as a course record as there were preferred lies after overnight rain, but it is the lowest round at Royal Wellington since the course redesign was completed in 2014. It also equalled his career low round at Horton Park on the Sunshine Coast.

With considerable media attention surrounding this tournament, an event run by the R&A and their partners from The Masters Tournament and the Asia Pacific Golf Confederation, the 120-strong international field is not only striving to collect the winner’s trophy, but starts at next year’s Masters and The Open.

Min Woo Lee was also impressive with his opening 4-under-par 67 with the 2016 US Junior champion sending a message to this international field that he is a player to deal with this week.

“I had a solid round of golf, I felt really good out there,” said Lee.

“Shae did have a good round, but I am going to stick to my game plan and not try and catch him. You don’t win it on Thursday, you only lose it on Thursday.”

“I still have three more rounds so I will see how I go.”

Harrison Endycott and Travis Smyth fired rounds of 1-under 70 to sit nicely in a share of 11th position with Smyth calling his round ‘one of the best 1-under’s ever’.

“It was a real grind out there today,” said Smyth.

“My caddie, John, kept me focus and to close out with a nice approach into 18 to get birdie was a great way to finish. There’s three rounds to go and I’ll be giving it my best shot.”

Of the other Aussies, Dylan Perry fired even par to be in a share of 17th position whilst Charlie Dann is at 3-over.