World Amateur teams to honour Lyle with No. 59

The respect Australian golfers had for the late Jarrod Lyle continues to thrive.

Besides many of the amazing feats he achieved, the fight he showed and the lives he touched, Lyle was also the 59th Australian men’s amateur representative at the World Amateur Team Championships. 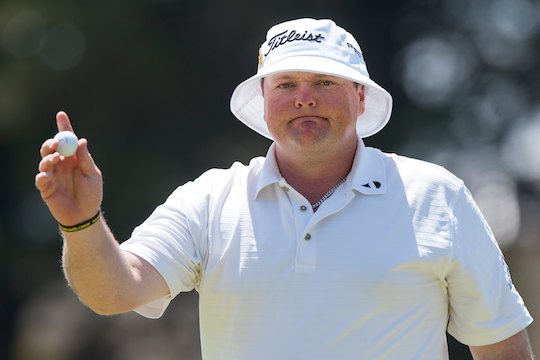 And even though their own numbers are precious to them, Australian players – both men and women – wanted to show their support for Lyle and besides wearing their own numbers will wear Lyle’s No 59 starting with the girls representing their country at Carton House in Ireland this week.

Kirsty Hodgkins as the 53rd woman to play in Australian colours for the Espirito Santo Trophy will treasure her number as will Becky Kay (No. 54) and Grace Kim (No. 55).

And on the men’s side Min Woo Lee (No. 80), David Micheluzzi (No. 81) and Shae Wools-Cobb (No. 82) also want to be just as loyal a week later when they begin their quest to defend the Eisenhower Trophy that Australia won in 2016.

But all six will carry Lyle’s special number as well. The number that the Victorian proudly wore alongside James Nitties and Michael Sim when he represented his country in Puerto Rico in 2004.

Each member of both teams will also carry that No.59 prominently on their cap, an “honour” that team manager Stacey Peters said had incredible significance given the outpouring of emotion around Lyle’s death.

“These guys have grown up with Jarrod’s story and he has been an inspiration to them the way he has tackled it and tried to help others on the way through,” said Peters.

“Wearing his number as a mark of respect is the least we can do.”

“The thing that really hits home to me is that Jarrod was so young when he started his first fight with leukemia in 1999 – he was pretty much the same age as these guys on the team.

“This is a huge mark of respect to wear his Australian representative number for this event, one that meant so much to him.”