World No 1 Nelly Korda has claimed a fourth LPGA Tour victory of the season after a dramatic finish to the Pelican Women’s Championship in Florida.

Korda defeated Lexi Thompson, Lydia Ko and Sei Young Kim at the first extra play-off hole with a birdie after all four players finished on 17-under par.

Earlier Korda was tied for the lead with two holes to play and appeared to throw the tournament away with a triple-bogey at the par-four 17th, allowing Thompson to move one ahead.

Thompson then bogeyed the par-four last to slip back to 17-under alongside Ko and Sei Young Kim, as Korda made a 2-metre birdie to close on 1-under 69 and take the contest to a four-way play-off.

“I didn’t really expect much going into this week,” said Korda. “I guess that should be my attitude every week, and just kind of have fun out there.”

“I tried to take the demeanour of like if I missed a putt, which there were a lot this week, just to kind of shake it off and see if I can do it the next hole. So I just tried to keep it really light and easy because I hadn’t played in a while, and there was expectations, a lot of talk.”

Korda, along with Jin Young Ko, are the only players to win four times on tour in 2021, although one of Korda’s victories includes a major, the KPMG Women’s PGA Championship. 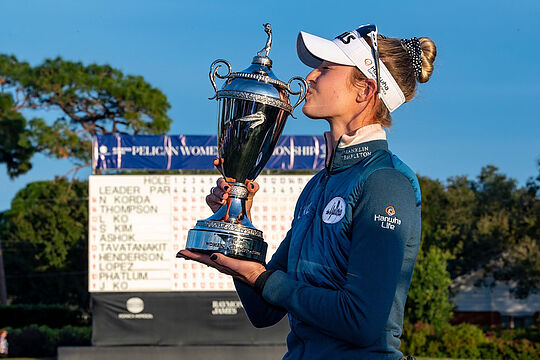 At just 23 years of age, she has seven LPGA Tour titles to her name and career earnings of just under US$6 million. With wins on the Ladies European Tour and the Symetra Tour and of course her Olympic gold medal in Tokyo, Korda’s total victory count since turning professional in 2016 now moves to ten.

Katherine Kirk finished the best of the Australians in a share of 40th position, with Su Oh next in a share of 52nd position. Sarah Kemp, and Sarah Jane Smith missed the weekend.

While Oh’s week was nothing to write home about, she managed to win herself a two-year lease on a Lamborghini with an ace at the par-3 12th and her second hole-in-one of the season.

The LPGA Tour season reaches its season ender next week at the CME Group Tour Championship.