Japan’s Keita Nakajima has shown why he’s the World No.1 amateur after taking down Hong Kong’s Taichi Kho in a thrilling two-man playoff at the Dubai Creek Golf & Yacht Club.

Nakajima calmly rolled in a 25-foot birdie putt on the second playoff hole to join fellow countrymen, Hideki Matsuyama and Takumi Kanaya, as the only Japanese players to win the tournament. Matsuyama went back-to-back in 2010 and 2011. Kanaya won in 2018 with Nakajima finishing joint runner-up that year.

“I am very proud of what I have achieved. To follow in the footsteps of Hideki-san and Takumi feels great. I am so excited that I will be playing three majors in 2022. I am very thankful to the tournament for giving us such great opportunities,” said Nakajima.

While the Asia-Pacific Amateur offers starts at the Open Championship and the US Masters, the 21-year-old also earned himself a spot at the 2022 US Open thanks to winning the Mark H. McCormack Medal in August. Nakajima was the second Japanese winner in a row following Kanaya’s win in 2020. 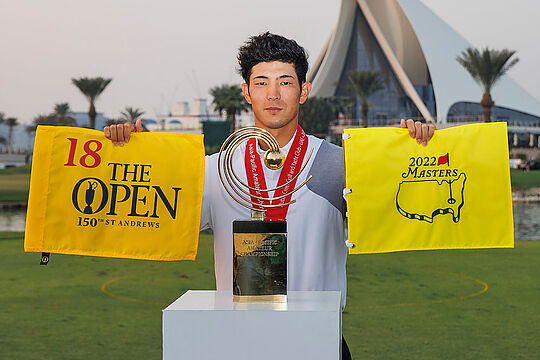 Victorian Andre Lautee took line honours for the Aussies claiming a share of 7th place at 8-under alongside defending champion, Yuxin Lin.

Connor McKinney, who sat one shot off the lead after 36 holes, was next best in equal 18th on 5-under with Haydn Barron a shot back in 21st place.

A costly third round 77, saw first round leader, Lukas Michel, drop into 26th position despite a gutsy final round 66.

2020 WA Open winner Hayden Hopewell (T28) and Lachlan Barker (T31) mark the last of the Australians in the field, all of whom made the cut this week in Dubai.