Spaniard Jon Rahm played far below his best but still managed to come out on top in capturing the $7.3 million Mexico Open on Sunday.

Rahm struggled in posting a final round two-under-par 69, winning by a shot over a red-hot Brandon Wu and Tony Finau thanks to a 17-under-par tally for his first victory since capturing last year’s US Open.

“I might seem frustrated sometimes…I might let some anger out and I might say some things, but I’m always hopeful and I’m always positive. That was key today. I never lost my approach and my confidence, and that’s why I got it done,” said Rahm.

Helping the Spaniard was a 15th club in his Callaway bag, and that was the very supportive Mexican crowd, who were behind him all the way to winning the first PGA Tour hosting of the Mexico Open, a former Latino American tournament.

What will concern Rahm was his struggle with the shortest club in his bag, and if it were not for a superb display of ball-striking all week with his driver, the 27-year-old might not have been stepping forward to accept what is his seventh PGA Tour win and 14th pro career victory trophy.

Rahm led the field at the close of day one and day three, and with a round to play there was no-one of note who was going to deny the World No. 2. 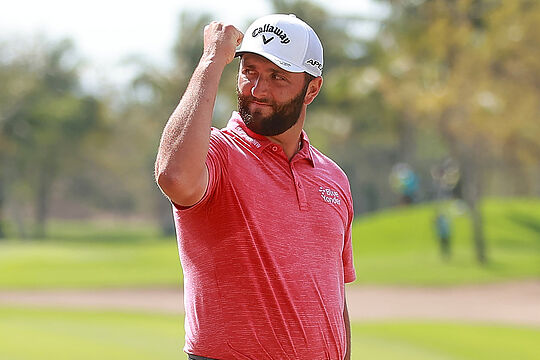 He arrived on the Pacific Ocean coastline having posted four top-10s this season as he sought a first taste of success since last winning some 1,400 miles north along the Pacific Ocean shoreline at Torrey Pines at the 2021 US Open.

Three players including the duo of Brandon Wu and Tony Finau, who each posted a final day 63, along with double DP World Tour winning Kurt Kitayama (68) shared second-place at 16-under-par.

Three-time PGA Tour winner Cameron Champ will also be encouraged with his second top-10 in a row. The former rising star has endured a lacklustre season missing five cuts and carding a previous best result of T46 at the Farmers Insurance Open.

A 10th place at the Masters last month and now a T6 in Mexico after a month off shows some encouraging signs of a turnaround in fortunes for the 26-year-old.

Matt Jones lead the way for the Australians in a share of 59th with Brett Drewitt fading away across the weekend for a 73rd place finish on 4-over.