Rahm was simply impressive firing a five-under 67 to win by two shots, finishing at 20-under-par, as Dunne and Elvira both carded final-day 71s. Rahm becomes the sixth Spaniard to win the Spanish Open since it became part of the European Tour in 1972, joining some illustrious company including Seve Ballesteros, Sergio Garcia and Miguel Angel Jimenez. 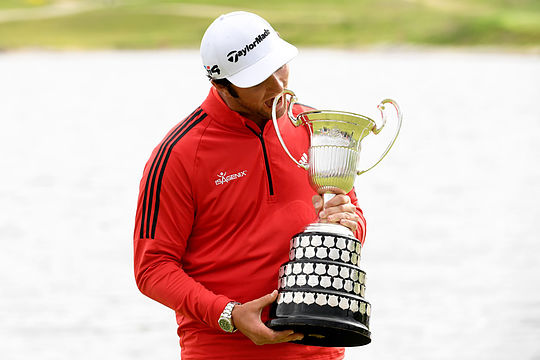 The victory is Rahm’s first as a professional in his homeland after claiming seven national individual amateur titles and adds to his two European Tour wins in Ireland and Dubai last season.

“You can tell how excited everybody is. I felt that tension, I felt that stress, I felt everything magnified. They were pushing so hard and I felt that.”

“I’ve been blessed to be national champion with the Spanish Golf Federation many times, European champion and world champion representing them. So being able to win this as a pro and do this for them and the Spanish people feels great.”

Rahm has been a professional for less than two years and in this short period he has produced a winning ratio unprecedented since Tiger Woods won eight events in his first two years. At 23 years of age, the Spaniard has made his mark on the world golfing stage with five professional wins to date, falling into the class of another of the ‘new’ breed of players making waves on the PGA Tour.

His victory on Sunday goes with two on the PGA Tour. He turned pro in June 2016, right after finishing T-23 to be the low amateur in the US Open at Oakmont.

As an amateur he was based at Arizona State where he won the Ben Hogan Award twice and collected 11 collegiate tournaments. Like Rickie Fowler, Rahm played so well in his first starts as a professional that he didn’t need Q-School or the Web.com Tour to earn a PGA Tour card.

Provided he can keep his infamous tantrums under control, we are sure to see a lot more of him.

Dunne had lead the tournament from the start yet faulted during the closing stages on Sunday. After carding a 66 and a 65 in the opening two rounds, Dunne had to fight hard to maintain his lead on Saturday and eventually gave in on Sunday as a closing round of 71 to hurt his chances of victory.

Brett Rumford had a stellar tournament with a share of 5th place at 15-under to be the best of the Aussies with Rumford’s final round 71 the only letdown in an otherwise superb display of golf.