World No.1 Spieth chases down Jones in Sydney

Australian Open champion Jordan Spieth moved into contention on Saturday with a third round 67 to be three shots from Aussie Matt Jones.

Spieth’s 68 shared the day’s low round where the majority of the field struggled to beat par. 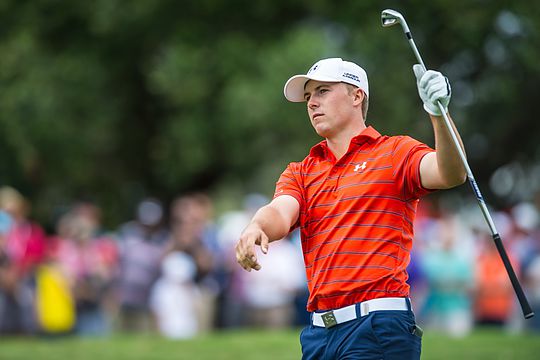 Jordan Spieth fired the equal low round of the day to finish three strokes off the pace at the 2015 Australian Open in Sydney today (Credit: Anthony Powter)

“When I finished the round I thought I’d either be tied or one back and it looks like I may be two or three, either way, it’s a lot better than I was to four holes today. Great fight back, one of the best fought rounds I’ve had that I can remember,” said Spieth.

Jones fired a third round 68 to be at 10-under while another Aussie PGA Tour player, Rhein Gibson, is in outright 3rd position at 5-under.

“One more day to go, I get to play with him (Spieth); be no better person to beat on the final day and have him in the group with me. So yeah, to go up against the number 1 in the world will be a lot of fun,” said Jones.

“I’m just happy to be in the final group leading the golf tournament with a chance to win. Of course we play golf for a living and to have the chance to win is what you want, and to go up against the number 1 in the world is even better.”

Since turning pro in 2001, Jones has just the single title to his name – the 2014 Shell Houston Open, which came in his 156th start on the PGA Tour.

Back in September, Jones led the PGA Championship by two strokes over Jason Day at the 36-hole stage before finishing in a tie for 21st position.

A member of The Australian Golf Club, Jones has played this course countless times yet faces a unique challenge in holding off a rampaging world No.1. who has his sights set on another Australian Open title.

We all know what happened on Sunday 12 months ago at the Australian Golf Club when Spieth fired a course record 63 to win by six strokes.

The final round pressure with the best player in the world hunting you down will certainly test Jones out to see if he has the fortitude to close out a victory.

Todd Sinnott, who is in his rookie year, began the day in third place but a round of 74 hampered his chances of lifting the trophy tomorrow as he now sits in a tie for 7th. Lincoln Tighe is in a tie for 4th at 4-under, alongside Aron Price.

Geoff Drakeford, who only just made the cut yesterday, fired an equal low round of 68 to move into a tie for 12th.

Anthony Brown, the 2014 NSW Open Champion, claimed the third ace of his career at the 198-metre second hole but walked away without a prize.