World’s best line up in Melbourne for World Cup

Lining up at Kingston Heath this week for the World Cup are not only three players ranked in the world’s top 10, in number seven Adam Scott, Hideki Matsuyama, the highest in the field at six, and Swede Alex Noren who is ninth, there are another 14 players in the world top 50 playing.

The field includes players with a combined 29 titles around the world this year alone, including American Jimmy Walker, who broke through for his maiden major win at the PGA Championship in July. 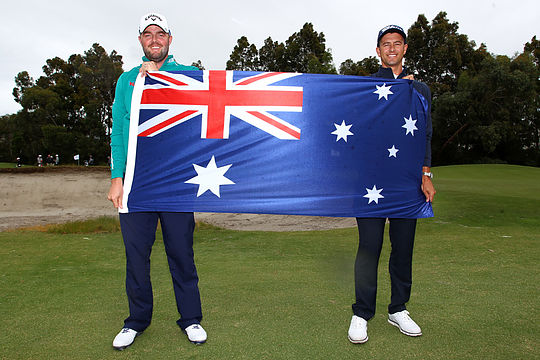 Foursomes, along with fourball, will provide the structure for the 2016 World Cup and while it is not a matchplay tournament, experience playing foursomes and fourball will give past Ryder Cup and Presidents Cup participants an advantage.

Several of the teams are particularly strong, especially those where both players have team experience.

The Americans Rickie Fowler and Jimmy Walker, Japanese Hideki Matsuyama and Ryo Ishikawa along with Belgians Thomas Pieters and Nicolas Colsaerts feature and not to forget the formidable combination of the Aussies on home soil Scott and Marc Leishman.

As juniors and amateurs Scott and Leishman learnt how not only to respect but play the famed Melbourne sand belt with its very distinct features, especially around the greens.

Length is not always an asset on these gems which all play firm and fast. Rather, precision and exquisite wedge play, coupled with fine putting are the keys to success.

“You have to know your spots to miss,” says Scott. “Some people will love it instantly, some won’t. That’s the beauty of all golf courses.”

“Kingston Heath is not long, it’s a very fun golf course and you can shoot really low there. You’ll have a lot of wedges in your hand – you have to be really precise.”

Rickie Fowler, a frequent visitor to Australia both in his amateur days playing the Australian Master of the Amateurs numerous occasions in Melbourne, loves the challenges associated with the sand belt.

“It’s different and unique, like nothing we usually play and you have to play smart, especially coming into the greens,” says Fowler.

“Coming off the amazing experience that I had at the Olympics, it’s great to have the chance to put on the red, white and blue again and play for the US in the World Cup of Golf.”

“Jimmy is not only one of my favourite guys out here on tour, but he is clearly one of the most talented players as well. I think we’ll make a fantastic team and our strengths will work well together. I’ve heard great things about Kingston Heath and can’t wait.”

The World Cup gets underway on Thursday with each team comprised of two players. The first and third days are foursomes (alternate shot) play and the second and final days are four-ball (best ball) play.