World’s best prepare for battle at US Open

The 120th US Open Championship kicks off this Thursday at Winged Foot Golf Club in Mamaroneck, New York.

The 144-player field is comprised of exempt players due to the impact of the COVID-19 pandemic with the annual two-stage qualifying (local and final), which had been conducted since 1959, cancelled. 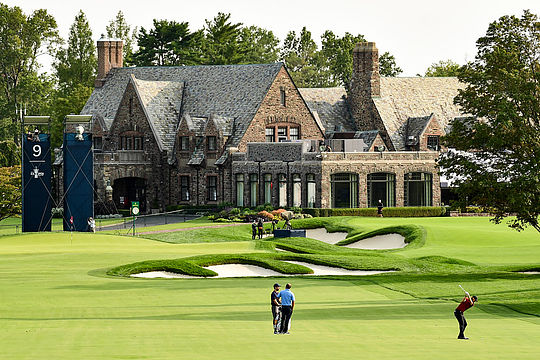 Players practice ahead of the 2020 US Open at Winged Foot (Credit: USGA)

Winged Foot is a par 70 and has the ability to be stretched out to 6,836 metres at the tips. Most say the biggest challenge is not in the course’s length but the greens, no more so than the par 4 15th which is sure to be a talking point.

Ten former champions are competing this week including three time champion Tiger Woods (2000, 02, 08), along with 2020 Player of the Year and the 2016 champion, Dustin Johnson.

The current World No. 1 and newly-crowned FedExCup champ, Johnson begins the week as a firm favourite with Rory McIlroy, who won the 2011 US Open also well liked alongside Jon Rahm and Bryson DeChambeau.

Victoria’s Geoff Ogilvy secured the 2006 US Open at Winged Foot with a winning score of 5-over-par after making clutch pars on the final two holes, including a chip-in on No. 17.

Jim Furyk, Colin Montgomerie and Phil Mickelson were all unable to par the 72nd hole and Ogilvy came away with a one-stroke victory leaving Mickelson stranded yet again in his bid for golf’s Grand Slam and Montgomerie without his first major.

The last international winner of the US Open was Martin Kaymer in 2014, with the American players tasting success ever since.

Steve Stricker, at age 53, is the oldest player in this year’s field and won the 2019 US Senior Open on The Warren Golf Course. Preston Summerhays, who won the 2019 U.S. Junior Amateur, is the youngest at age 18.

Thirteen amateurs have made the field, the eighth consecutive year that 10 or more amateurs are competing. Andy Ogletree, the 2019 US Amateur champion, and James Sugrue, who won the 2019 Amateur Championship are in this group along with Aussie Lukas Michel, who became the first international player to win the US Mid-Amateur last year when he defeated Joseph Deraney in the final at Colorado Golf Club.

Among the benefits enjoyed by the U.S. Open champion are a US Open exemption for the next 10 years, an invitation to the next five Masters, Open, USPGA and Players Championship and exempt status on the PGA Tour for five years.