World’s best prepare to do battle at brutal US Open

The US Open will be played at Oakmont Country Club for the ninth time staring Thursday where the world’s best will battle for the year’s second major. 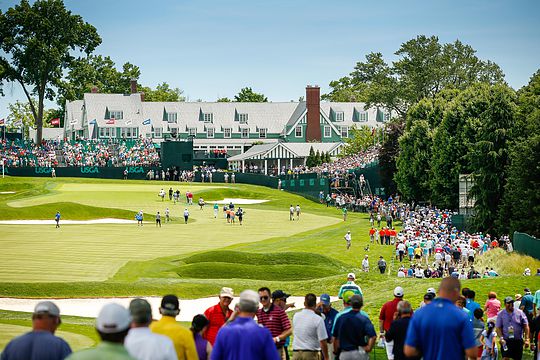 Crowds line the 18th fairway during the Monday practice round at the 2016 US Open (Credit: USGA)

It also boasts two of the longest par 5′s in the championship’s history, the 12th at Oakmont, which shares a tee box with the par-4 10th, played to 608 metres in 2007 which is presumably what it will play to again this year.

This, combined with the 210 bunkers, an average of just under 12 per hole, is sure the test the world’s best to their limits.

This is a tournament where the winner has simply survived as opposed to pummelling the golf course with birdies. Who will be the last man standing come Sunday?

Jordan Spieth has had a mixed year but is coming off a very impressive win in his home state of Texas. The 22-year-old is a phenomenal scrambler as well as a putter and this will be to his advantage around Oakmont.

Rory McIlroy secured an emotional clutch win at the recent Irish Open and followed it up with an encouraging top-5 at the Memorial. When he is on, his iron play is exemplary allowing him to hit greens in regulation and place himself with birdie chances. If he’s able to convert, McIlroy will certainly be in the mix on Sunday.

Jason Day possesses a peerless short game, his chipping is possibly the best in the world, with his putting not far behind. Waywardness off the tee can be a concern as was highlighted in the final round of the Memorial.

The world number 1 has already won three times this year and Day is hunting another major trophy to add to his win at the PGA in 2015. He’ll be looking to go further than a pair of runner-up finishes in 2011 (Congressional) and 2013 (Merion).

Day will be right amongst it on the back nine on Sunday, as he attempts to become Australia’s third US Open champion with David Graham and Geoff Ogilvy our former winners.

Scott is coming off two top-10′s in his last two starts at the US Open, yet the ever slick Oakmont greens will test his nerve. If Scott’s putter is hot he’ll be in hunt on Sunday.

With an opening pairing alongside Day, this should see a ‘rub off’ effect between the two Aussies and if one fires the other should follow.

Before the 2007 US Open, Oakmont underwent a major reconstruction, cutting down more than 4000 trees that were planted in the 1960s, lengthening the course to 6611 metres and reducing the par to 70 in the new style links course.

Angel Cabrera won in 2007 with 5-over by a shot from Tiger Woods and Jim Furyk. You would have to think the winner come Sunday would be shooting the same number – over par.

Australian TV viewers will once again have to turn to Foxtel for live coverage of this week’s tournament. The 2016 US Open will be available on FoxSports 2 starting on Friday June 17 at 12:00am with Monday’s final round coverage kicking off at 1:30am.