37-year-old Queenslander Michael Wright has taken out the 2011 Brunel West Australian PGA Championship by one shot over Terry Pilkadaris in a dramatic finale at The Novotel Vines Resort and Country Club.

Wright battled it out with Pilkadaris till the very last hole where he chipped out from a greenside bunker to putt for birdie and claim the win and the $16,500 winner’s cheque. 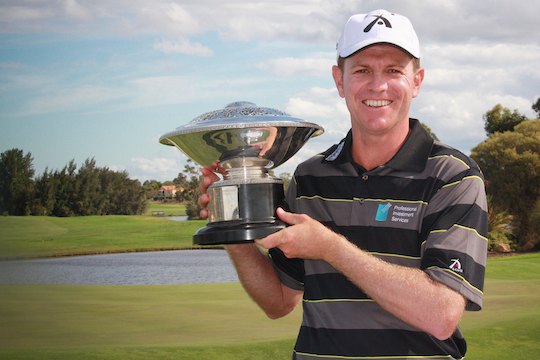 “I really felt that it was within my grasp all day, he was never more than two in front and all it takes is one shot in this game,” said Wright who didn’t hit the front until he sunk his very last putt of the day.”

“It was just a great battle and it was really fun to get out there and be under the pump and hit some good shots.”

The win for Wright now guarantees him a spot in this season’s biggest tournaments including the Emirates Australian Open, Australian PGA Championship presented by Coca-Cola, BMW NZ Open and the JBWere Masters.

“The number one goal today was to try not to think about the money or anything else. I shouldn’t really be thinking about the exemptions but it did come into my mind a little there today. But I was able to shut all those thoughts out and hit some good shots so I’m rapt.”

For Pilkadaris it was again a case of ‘oh so close,’ this tournament his third second place result in three consecutive PGA Tour of Australasia tournaments.

“I am comfortable being in the lead but it has been a bit frustrating not finishing it off,” said Pilkadaris who finished second in the South Pacific Open and the Queensland PGA Championship.

Andrew Martin capped off a great tournament with a final round of 68 to claim third position at 12-under par, while a fast finishing Max McCardle (65) and James McLean (66) tied for fourth at 11-under par.