Wu Ashun became the first Chinese player to win a European Tour event on home soil as he held off a spirited challenge from England’s David Howell at the Volvo China Open.

The 29-year-old Wu, currently ranked 247th in the world, shot a closing 71 that included eight pars in succession from the 11th hole at Tomson Shanghai Pudoing Golf Club to finish on nine under par for the week – one shot ahead of Howell, who missed an eight foot par putt on the last which would have forced a play-off. 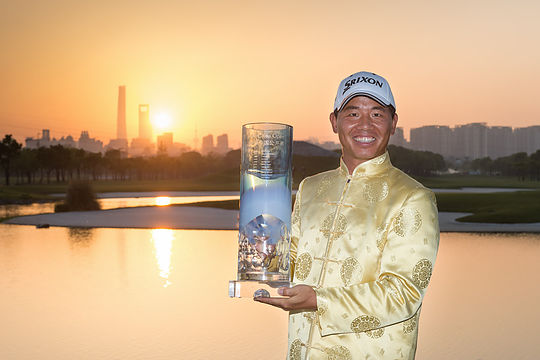 Wu, who primarily plies his trade on the Japan Golf Tour but now has exempt status on The European Tour, said: “It’s a wonderful day today.”

“It’s very special winning the China Open and it’s very exciting. I have many friends here, and they helped me a lot and pushed me to play well.”

Wu and Howell both started the day in a four-way tie for the lead with last week’s runner-up Li Hao-tong and France’s defending champion Alex Levy.

Former Ryder Cup star Howell initially took the lead when he got up-and-down from the front bunker on the second for birdie, but he bogeyed the fourth after a poor chip and a birdie from 15 feet on the fifth took Wu one ahead.

Howell drew level with a birdie from 20 feet on the ninth and, after both he and Wu had bogeyed the short eighth from the sand, went ahead with a gain from six feet at the ninth.

Wu responded with a gain of his own from similar range at the tenth as the pair found themselves locked together on nine under.

Howell had birdied the 11th from 30 feet to take the lead on ten under once more.

Howell’s approach to the 14th found a bunker and led to a bogey, and needing a gain coming down the closing stretch he missed first the 18th fairway and then the green before his crucial par putt slid by.

Richard Green topped the large Australian field in a tie for 18th with Matt Griffin finished the next best in 31st place.