Blake Windred has collected his maiden national ranking event winning the 2018 Avondale Amateur in dramatic fashion with a sensation up-and-down bunker shot on the last to defeat England’s David Hague.

Windred fired a final round of 70, which included six birdies, for a one shot victory at 6-under-par to claim victory over a fast finishing Hague. The Englishman had his ‘A’ game with him over the final stages of this 72 hole tournament, carding four consecutive birdies through holes 12-15, and posted the clubhouse lead at 5-under after a brilliant birdie at the last hole. 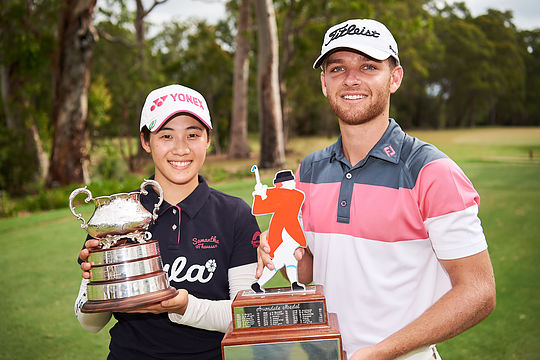 Windred in contrast needed to dig deep with some clutch putting saving his score as well as an impressive birdie on the 16th to give him a two stroke advantage with two to play.

A bogey on the short par 4 17th saw Windred heading down the long par 4 18th needed a par to claim the title. After splitting the fairway with his drive, Windred’s approach finished long and high in the left green side bunker, meaning he needed to execute a perfect sand save to head off a play-off.

“It certainly was one of my better sand saves that I’ve done,” said Windred.

“I was not striking the ball that well today, but I managed to get a decent score and that’s pleasing I can do that. It’s fantastic to finally get one across the line. I’ve won main junior events and the like, but this is my biggest win collecting a national ranking tournament.”

Jack Thompson from The Grange shared fourth with Indonesian Naraajie Ramadhanputra on 4-under, with overnight leader Grant Booth a further stroke back on 3-under, with Booth collapsing with a final round 75.

In the Ladies event, Japan’s Suzuka Yamaguchi won the Avondale Amateur by an impressive six strokes after a solid closing round of even par 72.

Yamaguchi was too good over the field with Avondale’s Grace Kim finishing second at 6-over and Doey Choi from Concord Golf Club a further shot back in third position.

Earlier Yamaguchi and Kim were tied for the lead after a two-shot swing on the first hole, however bogeys to Kim on the 3rd and 6th holes opened the door for Yamaguchi. Kim finished with a 76 with Choi matching Yamaguchi’s 72.

Yamaguchi, who the week before claimed The Australian Amateur Championship found the Avondale Greens “incredibly difficult to read” however summed it up perfectly in the presentation saying simply, “I love Avondale”.

Windred, along with a number of other top amateurs, head this week to Canberra where the NSW Amateur is being contested at Royal Canberra Golf Club.

“It will be great if I can go back-to-back victories,” said Windred who won low amateur honours at the NSW Open.

“I’ve got the confidence levels up, but we’ll see how we go.”