Yang advances to US Amateur semi-finals

Former Kingswood player Gunn Yang has progressed through to the semi-finals of the US Amateur with a 2-up win over American Cameron Young.

Yang, now a San Diego State sophomore and making his first appearance at a US Amateur, continues to close out his matches with aggression and conviction to the amazement of more established players. 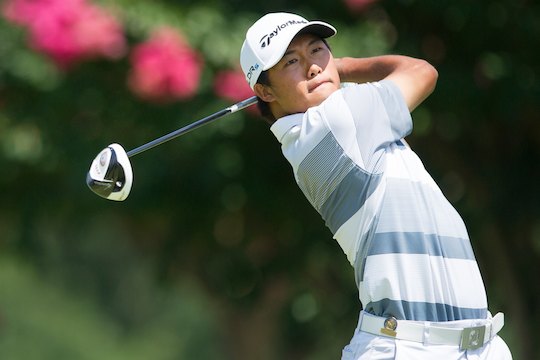 Gunn Yang teeing off at the 2014 US Amateur (Credit: Anthony Powter)

Ranked 776th in the world, Yang’s victory over Schniederjans, coupled with his win today, has shown he can produce the shots under pressure and that he’s a real contender for the title.

Yang will play Frederick Wedel, ranked 619th in the world and a junior-to-be at Pepperdine University who is also playing in his first US Amateur.

Yang again stormed home today during the closing stages of his match against Young, 17, ranked 100th in the world.

Birdies on the 212 metre par 3, 15th, considered the hardest of Atlanta’s Highlands course, and an eagle on the 18th cemented the victory for Yang, who attributes his time playing Melbourne pennants as a significant factor for his success this week.

“I learned how to play match play back in Australian playing for Kingswood. I learnt a lot from that as you are playing match play against many of Australia’s best players, some are in the nation squad and that certainly was an experience that I’ve valued.”

Yang spent four years in Melbourne also playing out of the Riversdale Club where he won the Club championship in 2009 as a 15-year-old.

“It taught me how to putt on fast greens, that’s for sure,” said Yang about playing in Melbourne.

When asked about the transition to playing the US Collegiate system, Yang says it was the step in the right direction for his playing career and has opened doors he feels are not available under the Australian system. For him, the decision to go to college in the US was the right one.

“It makes you work hard and unless you put in the effort you have no chance out here.”

“I came here [US Amateur] prepared and the hard work is coming through. Being in College makes you appreciate how much you have to work to get the results. It’s just so competitive and it’s a system I like.”

The remaining semi-final has Canada’s Corey Conners, ranked 44 in the world against American Denny McCarthy, ranked 36 in the world.

Conners, 22, reached the US Amateur semi-finals last year and was runner-up at the 2014 North & South Amateur at Pinehurst No.3.

A three-time All-MAC, Conners represented Canada at the 2012 World Amateur and played in this year’s PGA Tour RBC Canadian Open.

McCarthy, 21, is competing in his six US Amateur and has reached the match play segment in 2010-11-12. McCarthy was runner-up to Geoff Drakeford at this year’s Porter Cup storming home with a final-round 65.