Minjee Lee narrowly missed claiming her fifth LPGA Tour title on Sunday as South Korean Amy Yang fired an impressive nine birdies in a final round 65 to snatch victory by a stroke at the Honda LPGA Thailand.

On the 18th, Lee had the chance force a playoff with a four-metre eagle putt. She missed and had to settle for a birdie to finish with a 66 at 21-under. 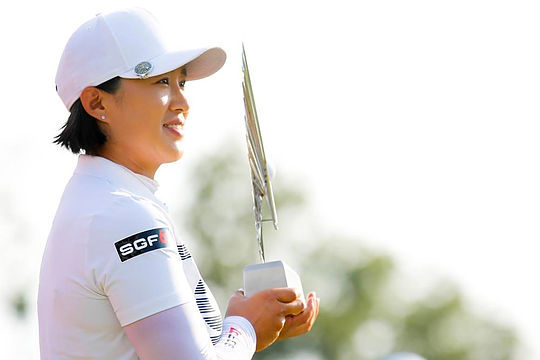 “I really fought out there,” said Lee. “Just tried to make as many birdies as I could. Probably didn’t play 15 and 16 the way I wanted to, but I think overall, I had a pretty solid performance.”

With both players starting the day in a share of the lead on 15-under, the final round proved a classic battle.

Yang, who used to play under the Australian flag in her earlier days as a student on the Gold Coast, made bogeys at the 3rd and and 14th, but then applied the gas rattling off nine birdies, including a run of five in a row between the fourth and the eighth.

Yang had to make birdie on the final hole after Lee had also birdied the last, but she kept her nerve to finish 22-under for the week to win the title in Thailand for the third time. Spain’s Carlota Ciganda finished third on 20-under.

Yang becomes a four-time LPGA winner following previous victories in Thailand in 2015 and 2017 and a win at the LPGA KEB-HanaBank Championship in 2013. She also won the 2006 Australian Ladies Masters on the Gold Coast as a 16-year-old amateur.

Queenslander Katherine Kirk was the best of the other Australians in a tie for 19th place.