The inaugural staging of the Australia Classic between the ALPG and China LPGA has seen four-time CLPGA winner Yanhong Pan take the title in a dramatic conclusion at Sydney’s Twin Creeks Golf and Country Club.

On a day when the lead fluctuated, Australian Rebecca Artis came to the final hole looking set to take the trophy after a crucial birdie at the 17th had given her the outright lead at 14-under-par. 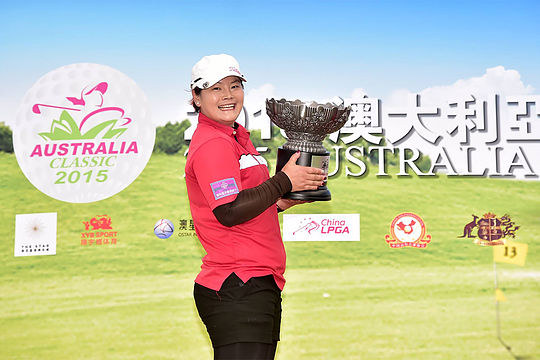 However, a poor tee shot on the tough 18th by Artis and a great approach to 12-feet by Pan brought the prospect of a two-shot swing into play.

That prospect became reality when Artis missed her par putt, allowing Pan to calmly sink her birdie putt to take the title, finishing at 14-under-par after rounds of 68, 65 and 69.

“It’s awesome to win,” Pan said, “I kind a struggled at the beginning, because the putting and the approach shot were not well. It was a tense competition for both of us. Artis is a good player and keep chasing closely.”

“At the 17th, she got the lead. I thought she might win but I didn’t expect she didn’t hit on the green after her second shot at the last hole.”

For her part, Artis was philosophical after her final hole mishap and the great birdie from her playing partner.

“I played pretty solid golf all day today, I hit some great shots coming down the stretch, you know I birdied 15 and 17, hit great one into 17 to give me a one shot lead.”

“I just hit a poor tee shot on the 18th and left myself to far in and it was a great birdie by her. That was one of the toughest holes on the golf course, that was an awesome birdie.”

Artis was able to console herself with a cheque for over $15,000 and takes a great deal of confidence from the week ahead of a return to the Ladies European Tour in a few weeks..

“Absolutely gives me confidence, it is all about putting yourself in contention, week in and week out and eventually and hopefully one day I can finish it off again.”

“But I am looking forward to China and Turkey. I had a great Aussie summer so I can’t be disappointed at all.”