Yarra Yarra successfully defended the prized Golf Victoria Division 1 Pennant title with a 4.5 to 2.5 win over Southern at Royal Melbourne.

The back-to-back win adds the club’s Division 1 flag total to ten and represents a turn-a-round in a season where the club was at one stage looking at relegation to Division 2.

“This is a wonderful win for the club,” said Bruce Davison, team manager.

“At one stage I was writing my report looking at seeing us playing Division 2 next year, but a couple of critical matches at Woodlands at round six got us over the line to give us a chance to the final, after we knocked off Commonwealth in the last game.”

“I was hoping on getting two at the bottom and two at the top,” said Davison.

“As is happened we were lucky enough to get that result and secure a back-to-back win, which is incredibly good.” 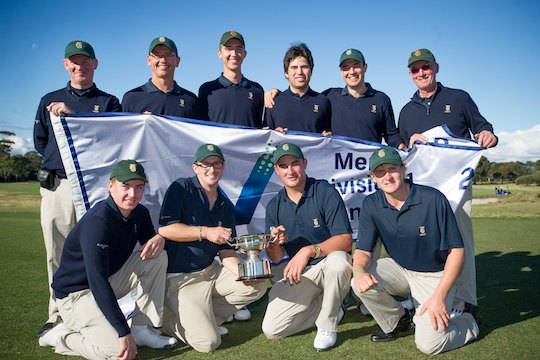 When the Woodward family of Peter senior and Ryan junior won their respective encounters, with Peter Woodward securing a 3&2 win over Torn Cowie at number six and Ryan Woodward winning 2&1 over Matthew Long at number five, Yarra Yarra certainly was in the box seat heading into the afternoon with three matches in.

Southern’s Lachlan Cain pushed Andy Roberts all the way winning on the 19th in the number four position, and Jack Besley at number three for Southern was too good for James Betts, winning their encounter 2-up. Yet it would not be enough for Southern who last year won the Division 2 flag.

Queensland representative Taylor MacDonald playing the top-order position for Yarra Yarra delivered the goods for his team with a stellar 3&2 victory over Ben Hollis.

“It had been a hard season,” said Davison.

“We have had ten good players and we have got over the line, which is fabulous.”

Players were punished with any errant tee shot and the greens were majestic. The West Course presented a fair, but stern test for this final.

It is without doubt the Melbourne Pennant series are the most competitive and well supported inter-club competition in this country.

In Division 5 Patterson River accounted for Eynesbury, 4&3 and in Division 6, Melton Valley lost to Churchill Park, 4&3.