Yarra Yarra has defeated 2009 winners, Commonwealth, 4&3 to claim the prized Division 1 flag of the Melbourne Metropolitan Pennant held on the North Course at Peninsular Country Club.

Yarra Yarra’s 2012 season included seven wins to Commonwealth’s five with Daniel Nisbet the only player in the series to remain undefeated.

Nisbet proved again why he is one of our most promising talents and he will head to the UK and US full of confidence following an outstanding Australian summer with a win at the Lake Macquarie Amateur and runner-up finish at the Australian Amateur some of his season highlights. 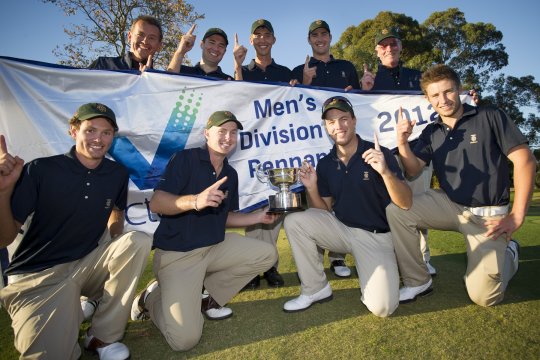 At the turn, the final appeared to be well within the grasp of Yarra Yarra, with five of the seven matches in their favour, yet Commonwealth fought back strongly during the closing stages.

At that stage of the final Yarra Yarra’s number seven, Ben Rogers, had disposed of Jordan Lett, 5&4, for the first blow against Commonwealth. It was a display of precision golf with Rogers never letting Leff into the match.

When Yarra Yarra’s Ryan Woodward easily accounted for Michael Burgess with a 6&4 win to collect the number four match, the final rested at two a piece, but with both Nisbet and Pearce keeping their noses in front with the top-order matches.

Lucas Herbert playing number three for Commonwealth secured one of his biggest wins with a 4&2 victory over Ben Campbell and, with that, Commonwealth had fought its way back into contention needing a win from either Drakeford or Hinkley to collect another flag.

Yet the top-end of Yarra Yarra with the experience of Pearce and Nisbet proved too strong.

Pearce played solid match-play golf, keeping the ball in play around the tight Peninsula North course layout and hitting the centre of greens in a display of disciplined golf.

A delicate bump and run by Pearce on the 17th effectively shutting the gate on Hinkley to bring the final to a close after Nisbet defeated Drakeford on the 16th.

In the other Divisions, Southern defeated Metropolitan 4&3 in Division 2 with Rory Bourke accounting for Todd Sinnott in the top-order match, 3&2.

Heidelberg lost to Goonawarra 4&3 in Division 5, with Riversdale accounting for Patterson River, 4&3, to claim Division 6.