New Zealand’s Kobori became the seventh dual winner and sixth player to claim back-to-back titles in Victoria’s oldest junior tournament finishing at 10-under-par for a four shot win. The last time such a feat was achieved was by Daniel Gaunt in 1995 and 1996.

“It feels amazing. Last year I didn’t really know I had won until I had finished but this year I had full control of what I was doing so it feels so much better,” said Kobori, 16.

“It’s pretty tough out here, honestly. If you can play good out here you can have low scores but there’s not much room for error so it feels good to win on this course.”

Kobori’s nearest rival throughout the tournament was Commonwealth’s Daniel Gill. The pair shared the lead at the end of each round with the tug-of-war ultimately slipping from Gill’s hands following a three-over that saw him drop back to 5-under for the tournament and 3rd place.

Royal Fremantle’s Hayden Hopewell carded a final round 2-under to slip into outright second at 6-under, while Louis Dobbelaar (QLD) and Lachlan Chamberlain (ACT) rounded out the top five. 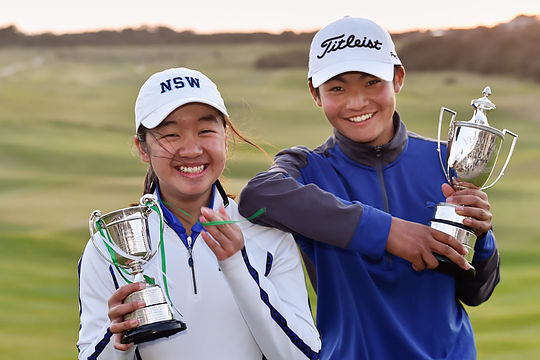 In the girls field, the tournament was fought out between New South Welshwomen June Song and Sophie Yip.

The two entered the day joint-leaders at two-over, four shots clear of the next best competitor, Victorian Jeneath Wong.

Yip, coming off the back of a stunning bogey-free third round, carded an early birdie on the fourth to settle the nerves and pull away from Song.

After 16 holes, Concord’s Yip found herself three shots clear but a dramatic two-shot swing, after a Yip bogey and a Song birdie, bought Song within one down the last with Yip holing out for eagle on the last.

“It sounds pretty unreal to be honest. I’m still getting over the shock but it’s pretty exciting,” said Yip.

“To be honest when I lined up that shot I was a bit shaken, a bit nervous…but I just kept my cool and hit it.”