Viktor Hovland has won his first Rolex Series title as he completed a sensational finish with a playoff victory over Richard Bland at the 2022 Slync.io Dubai Desert Classic.

The Norwegian was barely in the picture when he missed a short putt and made a bogey on the 15th but he finished birdie-eagle-birdie to sign for a 66 and post the target at 12 under. 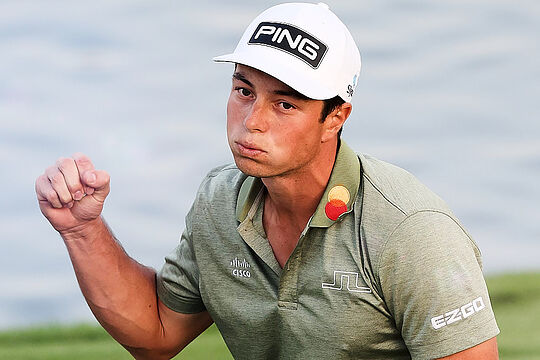 48-year-old Bland joined him in the clubhouse with a birdie-birdie finish of his own in a 68, with two-time champion Rory McIlroy finding water on the last to fall out of the playoff. It was McIlroy’s second bogey of the week at the final hole and was the only difference between walking away with his third Dubai Desert Classic title.

Hovland made a two-putt birdie on the first trip back up the 18th and when Bland failed to get up and down after finding a tricky lie with his second, it was the 24-year-old who was left holding the trophy at Emirates Golf Club.

Hovland becomes the first Norwegian to win a Rolex Series event and adds this title to his maiden DP World Tour victory at the 2021 BMW International Open along with three PGA Tour titles.

It is his third win in five starts after back-to-back victories in November and December at the World Wide Technology Championship at Mayakoba and Hero World Challenge, and could move him up to third in the Official World Golf Ranking.

“This is pretty wild. I didn’t really think this was possible going in today,” said Hovland, who started the day six shots off the lead. “I knew I had to shoot a really low number but a lot of things had to go my way and I’m thankful that they did.”

“I’m pumping right now. It’s a little bit surreal and it’s hard to kind of calm yourself a little bit but you’ve just got to rely on all the shots that you hit and just go back to what you know.

“I was fuming after the three-putt on 15 and thought that was it and I knew I just had to try to finish off well and get a nice position for the week. I rolled a really long one on 16 and then on 17 and, hey, we got a shot.”

Returning from a two-month break last week in Abu Dhabi where he finished 10th, Scott went one better on Sunday with a share of 9th on 7-under.

“It’s a strong field and it’s fantastic to see this event in Dubai upgraded status to a Rolex Series Event and bring in all the big names from around the world. It really is an iconic tournament and it’s nice to see it like this,” said Scott.

“I’m playing okay. I wish for better of course. I came here to win a tournament and I felt good after last week as well but I just didn’t play well enough, and hopefully I’ll get another chance next year.”

Lucas Herbert (T18) and Maverick Antcliff (T66) were the last of the Aussies through to the weekend.