Young Jack has his eye on the prize

After scoring his second hole-in-one in the space of six months, 12-year-old Jack Trent has set his sights on landing a bigger fish – the Headland club championship.

If he achieves that goal the seven-marker will be the first primary school student to win the Headland Golf Club championship in its 56-year history. And he will accomplish something the likes of former Headland juniors Adam Scott, Craig Jones, Andrew Bonhomme, Marcus Cain and Richard Moir were unable to attain. 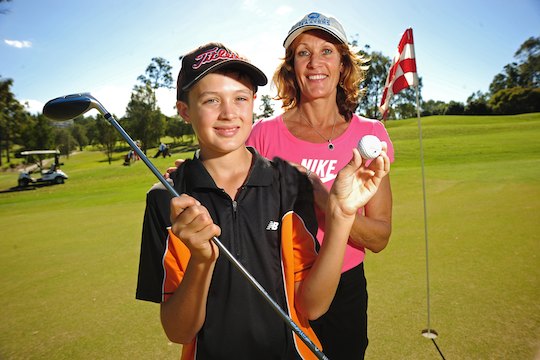 The Year 7 Buderim Mountain Primary School student is still soaking up the plaudits after acing the 161-metre par-three 14th,on January 5. Back on July 12 last year he scored his first hole-in-one on the 8th, a slightly longer 167 metres. The two Headland holes are rated 11 and 10, respectively.

While winning the championship in June and competing against some formidable talent is obviously a huge ask, Jack’s recent imposing record says it is not beyond him.

Since moving from Perth with his family 18 months ago, he has shaved 17 strokes from his handicap. He is currently being coached by respected Hyatt Coolum head pro Peter Heiniger and is a member of the Sunshine Coast’s Invincibles program.

During the school term he plays golf on both days of the weekend, practises six days a week, has two lessons from coach Heiniger and practises his drills every single day.

“Jack has his heart set on becoming a professional golfer, and winning the Headland championship is certainly a goal,” says his mum Louise.

“He knows it will take a mighty effort to do this while he is so young, but he is very dedicated and his handicap is now at a level where he can compete against the best.”

While Headland boasts 50 members playing off Jack’s handicap of seven or lower, long-time club professional John Victorsen said his chance of winning the championship was not unrealistic.

“Jack is a rare talent and his game is improving day by day,” he said.

“History tells us that scoring over the four rounds of our championship is rarely below par, so if he can play well, stay focused and not be intimidated if he gets in front, he is certainly not without a chance.”

To support Victorsen’s observation about championship scoring, only three rounds below par have been registered during the past five four-round events. Four of those past five Headland champions – Aaron Shaw, David Rattray, Ben Wedmaier and Brian Kesby – are considered frontrunners again in 2011.