Carson Young scored a one stroke victory over China’s Carl Yuan and fellow Americans Brandon Matthews and Jimmy Stanger to take out The Panama Championship on Sunday in Panama City.

The victory was Young’s first on the Korn Ferry Tour in just ten starts on the PGA Tour feeder and came after he missed the cut in his opening two events in the Bahamas. 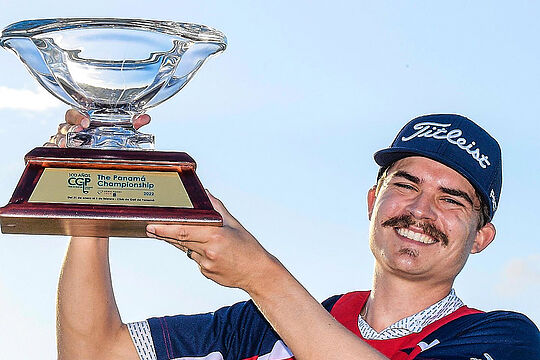 “What I’ve dreamed of ever since I turned pro is to win on the Korn Ferry Tour,” said Young.

“This is a really special moment for me. Had some good practice rounds. I was feeling good with my game. I felt like this course set up well for me. You had to be a pretty good ball-striker. I just played really solid golf. Hit a bunch of fairways, bunch of greens, and made a few putts here and there that ended up turning out to be good enough.”

It was a breakthrough win for Young, 27, who has primarily played mini-tours with mixed success. Whilst 2022 is Young’s first on the Korn Ferry Tour, he played in seven events between 2017 and 2021. Six were through Monday qualifiers and the other was a sponsor exemption for the 2021 BMW Charity Pro-Am. Young’s best finish in those starts was T50.

Young’s only other professional win was in the LOCALiQ Series where he won the 2020 Jacksonville Championship. Sunday’s winner’s cheque of US$135,000, his biggest to date in his career earnings of US$158,000 from the Korn Ferry and Canada Tours.

Harrison Endycott finished the best of the Australians in a share of 32nd position, a final round 70 moving Endycott eight places up the leaderboard. Rhein Gibson also made the weekend to finish in a share of 56th position.

The Korn Ferry Tour wraps up its international opening schedule with a final stop this week in Bogota, Colombia.