News broke in the last fortnight that Tiger Woods would be teeing it up alongside his 11-year-old son, Charlie, for the first time at the annual, and unofficial, PNC Championship in Orlando next week.

And now Justin Thomas has added a little more to the back story after indicating that Woods’ trash-talking son may well have been the impetus for the decision to play. 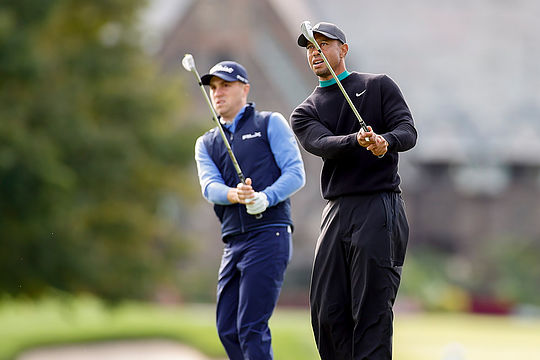 Justin Thomas practices alongside Tiger Woods at the 2020 US Open (Credit: USGA)

“For some reason, Charlie just always wants to beat me, it doesn’t matter what it is,” said Thomas ahead of last week’s Mayakoba Golf Classic where he finished in a share of 12th.

“Although he’s never beaten me in golf or a putting contest, he still talks trash just like his dad. It will be fun. We’ll have that like inner tournament within a tournament, trying to shut his little mouth up, but it will be fun.”

Thomas added that the youngster was so keen to go up against the current World No.3 that he requested they even play in the same group.

“Yeah, Tiger and I talked about it a bunch. He brought it up a while ago that Charlie wanted to play, and Charlie really wanted to play with us. I’ve obviously gotten to know him well, and he knows my dad a little bit as well.”

The 36-hole tournament kicks off on December 19th where Bernhard Langer and his son Jason will defend the title they won last year with an eagle on the first hole of a sudden-death playoff with Team Goosen and Team Lehman.