Two birdies in the last four holes was enough for Adam Scott to snatch the share of the lead following the second round of the Australian Masters at Royal Melbourne Golf Club.

The world number two carded a 66 to add to his opening round of 67 and is at 9-under-par to be in a share of the lead with talented rookie professional, Nathan Holman. 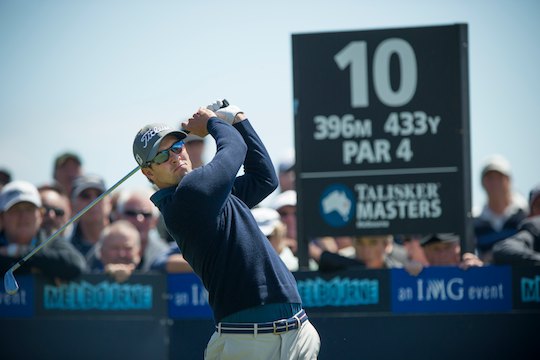 Adam Scott follows his tee shot during the second round of the Australian Masters at The Royal Melbourne Golf Club (Credit: Anthony Powter)

Holman earlier fired a peerless 6-under-par 65, which included a tasty birdie on the last to lead the field following the morning round.

Holman will tee up along side Scott in tomorrow’s third round and admitted earlier that it would be a dream pairing for the 22-year-old despite all the attention.

“It would be awesome to play the Masters champion and just try to go head to head with him. Adam is my idol, he is the whole package really, so it will be cool to play with him.”

Scott again put on a wonderful display of crisp ball striking blasting out of the blocks with three birdies to get his momentum flowing early.

Scott’s driving has been nothing short of spectacular over the last week – as seen when he blasted the Royal Pines layout to win the Australian PGA Championship last Sunday.

“It was a dream start,” said Scott.

“It’s nice to get off the tee with that score and I managed to keep the card clean for the remainder of the round with no bogeys.”

“This is a tough course off the tee and you have to position yourself to have the better approach into the green. Today, I managed to control my approach shots and that helped my score.”

It was another peerless display by the Masters champion going out in 3-under and coming in 2-under in the afternoon in what was difficult afternoon conditions as the southerly lashed this wonderful Royal Melbourne layout.

Scott’s eye is certainly in with only a single bogey recorded on his card in two rounds, which includes ten birdies and an impressive 87% greens in regulation.

Matt Griffin was another to card a stellar round with his 65 the day’s equal low round along with Holman.

Griffin is searching for his maiden Australian Tour victory after securing two victories on the OneAsia Tour and is in a tie for third one behind Scott and Holman at 8-under, along with first round leader Nick Cullen.

American Matt Kuchar lurks dangerously just four off the pace following a second round 66 and is a real threat to this field.

Kuchar is a six-time winner on the PGA Tour, with the 2012 Players Championship winner getting better with every round at Royal Melbourne.