On Sunday Curtis Luck recorded one of his highest finishes on the Korn Ferry Tour finishing in a share of 5th at the Chitimacha Louisiana Open, two shots behind eventual winner, China’s Carl Yuan.

A final round 65 moved Luck eighteen places up the leaderboard for his first top-10 this season and his best finish since winning the Nationwide Children’s Hospital Championship in August 2020. 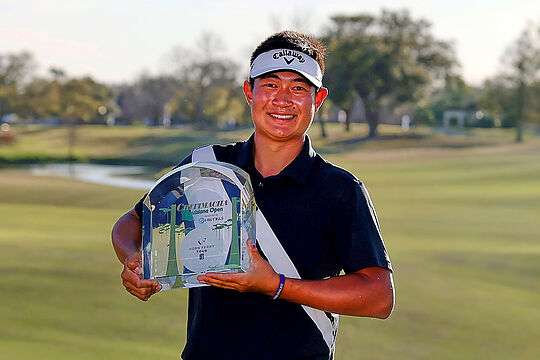 China’s Yuan also carded a final round 65 to force a playoff with American Peter Uihlein where he won on the first sudden death hole with a birdie for his breakthrough PGA Tour victory after four runner-up finishes.

Yuan began the final round in a share of 7th place at 8-under par and five strokes behind Uihlein, the outright 54-hole leader, before making his charge with four consecutive birdies from the 7th hole before another on the 15th.

While Sunday was Yuan’s first Korn Ferry Tour victory, he previously won on PGA Tour China as an amateur at the 2018 Qingdao Championship. Yuan’s victory takes him to No. 1 on the 2022 Korn Ferry Tour Regular Season Points List, passing Brandon Matthews, who finished in a share of 21st and dropping to second on the rankings.

Brett Drewitt was the next best Aussie finishing in a share of 51st position with a final round 74 damaging his chances. Rhein Gibson also made the weekend to share 74th place.

Aaron Baddeley and Steven Bowditch missed the weekend with Bowditch firing rounds on 77-75 to be 10 over for two rounds. Bowditch, a former PGA Tour winner, hasn’t made a cut on the PGA or Korn Ferry Tour since the 2017 Wyndham Championship.