Will Zalatoris outlasted Sepp Straka to claim the FedEx St Jude Championship on Sunday, winning on the third extra play-off hole to claim his maiden PGA Tour victory in the first tournament of the FedExCup Playoffs.

Prior to Sunday, Zalatoris was 0 for 2 in playoffs in 2022. He lost to Luke List on the first extra hole at the Farmers Insurance Open in January, and then came up short in a three-hole aggregate playoff against Justin Thomas at the PGA Championship in May.

The 25-year also finished 6th at the Masters, and runner-up at both the PGA Championship and the US Open.

With the victory, Zalatoris rockets up to No.1 in the FedEx Cup points and pocketed US$2.7 million in prize money to take his career total to just under US$13 million with US9.4 million of that figure coming from this year alone.

His only other professional win came when he won the TPC Colorado Championship on the Korn Ferry Tour in July 2020. At 14th in the Official World Golf Ranking, he was the highest-ranked player in the field without a PGA Tour win.

“I think anytime you put yourself in contention, you’re going to learn something about yourself,” said Zalatoris.

“The first at the Masters [to Hideki Matsuyama in 2021] was life-changing because it put me in position to play out here as much as I wanted to and put me kind of on the map. The second at the PGA was kind of affirmation that it wasn’t a fluke of a week, and the third one at the US Open gave me that much more belief that I can win a major, I can win out here. It was just a matter of time and obviously this was my week.”

Zalatoris, who played as an amateur in the Australian Master of the Amateurs, was firm in the view he still has unfinished business to attend to, in particular with the majors where he has been so close to a title, yet not able to get the result. In the last nine majors Zalatoris has withdrawn once, missed one cut and played his way into the top-8 six times, including three runner-up finishes. 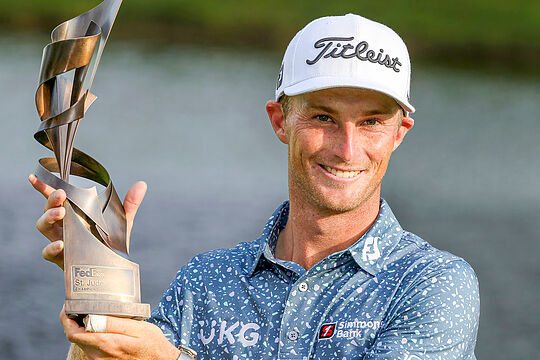 “I’ve always had the attitude of, the job’s not done,” said Zalatoris. As great as it is to pull this off, I still feel like I’ve got some unfinished business going forward.”

Adam Scott finished the best of the Australians in a share of 5th position, a closing round of 66 moving the former Masters Champion twenty places up the leaderboard. The result sees Scott up to 44th in the FedExCup rankings, qualifying for this week’s BMW Championships as a result.

Cam Davis also fired a closing round 66 to jump twenty-three places to a share of 13th position finishing alongside Cameron Smith, who was penalised two shots following a delayed dropped ball ruling on Saturday. Marc Leishman was the last of the Aussies to make the weekend closing in a share of 64th position.

Jason Day and Lucas Herbert missed the 2-under cut mark.