American Will Zalatoris closed with a final-round 3-under 69 to earn a one-stroke victory over Chase Johnson at the TPC Colorado Championship at Heron Lakes for his first Korn Ferry Tour title.

The 23-year-old former Wake Forest star earned $108,000 and jumped from fourth to first in the points race for 25 PGA Tour cards. 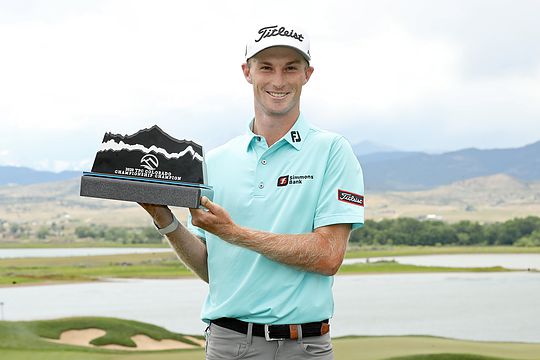 Zalatoris finished at 15-under for his fourth straight top-10 finish and sixth in nine starts this season. The 2004 US Junior champion and former competitor at the Australian Master of the Amateurs, birdied the par-3 16th and parred the final two holes to help off Johnson.

“It’s been probably four years since I’ve won a golf tournament,” said Zalatoris. “It still hasn’t sunk in, that’s the part that’s kind of crazy. We’re one step closer to getting our (PGA TOUR) card so, two more (wins) to go.”

What’s In The Bag: Will Zalatoris

Zalatoris, who began Saturday’s final round in fourth in the points race on the Korn Ferry Tour, had been in contention in the previous three tournaments but came up just short finishing in the top-5 each time.

Since the tour began playing again after a three-month during the COVID-19 pandemic, Zalatoris has had just one round over par.

Zalatoris’ best finish before Sunday’s win was a tied 3rd at the 2019 Lecom Health Challenge. The US$108,000 is Zalatoris’ biggest pay cheque since leaving College at Wake Forest with one semester remaining in January of 2018. He was the ACC player of the year in the spring of his junior season in 2017 and left with four victories.

Brett Coletta was the best of the Australians finishing in a share of 17th position at 8-under-par, his final 3-under par round moving the Victorian three places up the leaderboard.