Zabrizio Zanotti is celebrating becoming the first Paraguay-born player to win on the European Tour defeating World No. 2 Henrik Stenson at the fifth extra play-off hole to capture the BMW International Open near Cologne, Germany. 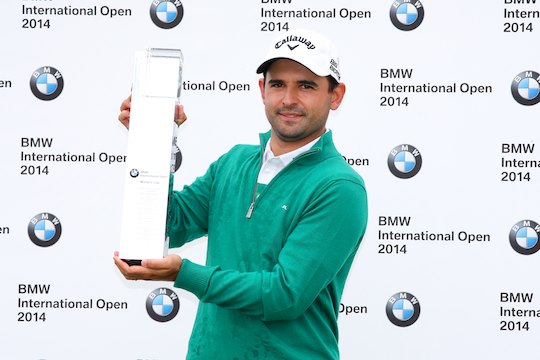 After Havret dropped out at the second extra hole, the current 305th world ranked Zanotti and competing in his 180th Tour event, matched the birdies of Stenson and Cabrera-Bello at the third extra hole where rain began falling heavily.

Stenson and Cabrera-Bello were then in the rough off the tee at the fourth extra hole, the par four 18th, with the Spaniard dropping out after finding water guarding the green with his second shot.

Stenson was forced to lay-up short of the green before matching Zanotti’s par.

However Stenson then found the water with his tee shot at the fifth extra hole and shortened par four 17th, with Zanoitti sensibly electing to lay-up.

Zanoitti then created European Tour history when Stenson, who found a greenside bunker with his third shot, conceded victory when failing to find the bottom of the hole with his bunker shot and then showing his disgust in hitting his ball in the water ahead of shaking hands with the surprised Zanotti.

And England’s James Heath was in disbelief after being handed the keys to a gleaming €160,000 gleaming BMW i8 sports coupe after a hole-in-one at the par three 16th.

It is London golfer’s first Tour hole-in-one and the 17th in his career but strangely just the first time he’s won any prize.

Australia’s Richard Green failed to capitalise on his third round 62 and closed with a 70 in equal 12th and just three shots off the pace.

South Australia’s Wade Ormsby finished T33 while the only other Australian in the field, Brett Rumford, missed the cut.