It was the second longest championship match in history and it ended in heartbreaking fashion for Ruffels, who lipped out a one metre par putt that would have extended the match. 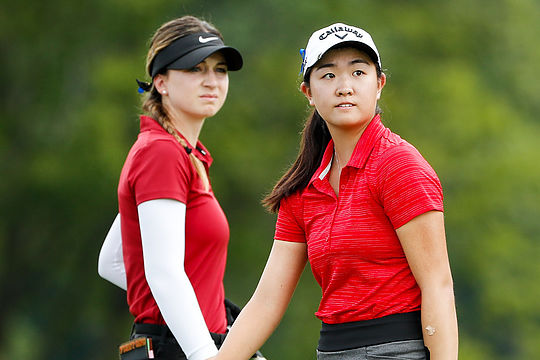 Australia’s Gabi Ruffels and Rose Zhang face off in the US Women’s Amateur Final (Credit: USGA)

Ruffels was looking to become the fifth player since World War II, and the first since Danielle Kang in 2011, to successfully defend her title.

“You can’t take any putt for granted out here,” said Ruffels. “These greens are crazy fast, and that did have a little break to it. I was playing it outside of the hole. I actually hit it on my line, but it was heartbreaking to see it horseshoe out.”

With the match tied on the 36th hole, Zhang delivered the shot of the championship. After missing her drive into the left rough, her recovery effort failed to get back to the fairway.

Ruffels was on the green in regulation meaning Zhang needed to get up-and-down from 95 yards to have a chance to stay alive. Zhang then struck a perfect wedge shot to the front of the green, which bounced up and curled to within a metre for a conceded par.

When Ruffels’ 25-foot birdie effort came up short, the championship match was extended to extra holes for the first time since 2001.

Pars were recorded by each player on the first playoff hole before Ruffels missed the fairway and needed to get up and down to extend the match. Zhang played tee to green to secure the championship after Ruffels’ putt missed.

“Winning the US Women’s Amateur means the world to me,” said Zhang, the No. 9 player in the Women’s World Amateur Golf Ranking. “To have my name on the trophy with the best players of all time is life-changing for me. It’s a dream come true.”

She also earns an invitation to next April’s Augusta National Women’s Amateur, and is likely to receive invitations to next year’s ANA Inspiration, Women’s British Open and Evian championships, provided she is still an amateur.