The 20-year old Milan amateur giant came from two strokes back heading into the final round but then had to wait two hours before being confirmed as the new champion. 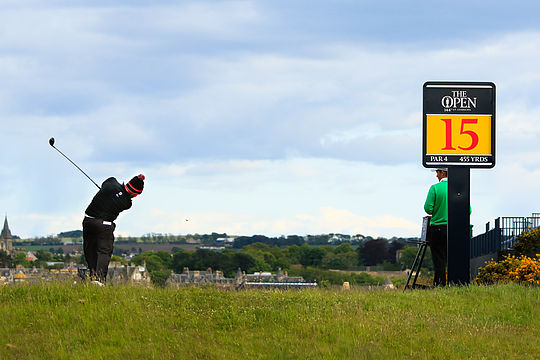 Anthony Murdaca tees off in the final round of the 2015 St Andrews Links Trophy (Credit: Stuart Adams/www.golftourimages.com)

Zucchetti, who stands 6 foot 2 inches, is only the third non – GB&I golfer in the 38-year history to win the St. Andrews Links Trophy and with the 2013 Italian Open champion and also last week’s Italian Amateur Stroke-Play winner posting a final round of 72 for a two under par tally.

And Zucchetti’s victory comes 20 years after fellow Italian Costantino Rocca lost out in a play-off for the 1995 Open Championship on the same Old Course.

“To win at the Old Course is very special especially after finishing third in this tournament last year and just one shot behind,” he said Zucchetti.

“I shot one under on the Jubilee course on Friday and I was six shots from the lead so I knew it would be tough as the Old Course can be very hard.

“But to win also with all the grandstands, scoreboards and tee markers already in place for The Open next month was like an incentive for me as I won in Turin last week where they play the Italian Open.

“My next event is the Amateur Championship and I am going there with two wins and maybe I can do the same as Matteo (Manassero) as that would be very special.”

Manassero won the 2009 British Amateur and has since gone on to four times on the European Tour including denying Scot Marc Warren in capturing the 2013 BMW PGA Championship.

Previous non GB&I winners of the St. Andrews Links since its inception since in 1989 include Australia’s Stuart Bouvier (1990) and Dutchman Daan Huizing (2012).

Flippo Campigli made it an Italian one-two finish recording a 68, and the lowest closing round, for a one under par tally.

Anthony Murdaca topped the Aussie field in 11th place at 3-over despite a costly final round 76. Lucas Herbert and Ben Eccles finished one shot back at 4-over and equal 14th.

Kiran Day (T37) and Zach Murray (59) were the only other Aussies to make the cut.