Zunic finds form on day one of NT PGA

Jordan Zunic has left his mark on the Palmerston Golf Course in the first round of the Northern Territory PGA Championship.

Teeing off the 10th, Zunic was slow to get started making the turn in just 1-under the card. 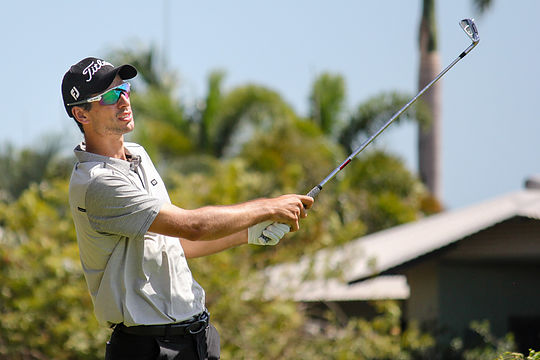 However it was the front-9 where the 2015 New Zealand Open champion really ignited. He posted six birdies, four consecutively, on his way to firing 7-under 64.

“It’s always nice to start off a tournament well. I was feeling really nice over the ball and managed to hole some putts. I am wrapt with the way I started,” said Zunic.

“I kept my ball in play and I was fortunate on quite a few holes that I hit it close to the hole with my approach shots.”

“I was hitting from inside five feet for birdie on 3, 5 and 6. That makes it easy, when you have some nice short putts to tap in for birdie.”

The young gun was excited to see his hard work over the past few weeks paying off on his home tour; the ISPS HANDA PGA Tour of Australasia.

“This country style golf course reminds me of the courses I used to play on when I was younger. Being from the South Coast, from Wollongong, we have a lot of courses that are short and tight like this one,” added Zunic, who has recently spent some time with his coach Warwick Dews, the PGA Pro at Cronulla.

Since his win at the New Zealand Open in 2015, many opportunities have come up for the 24-year-old including playing in the WGC – Cadillac Championship where he had a practice round with World Number 1 Jason Day.

“I have done a lot of travel this year. I have really enjoyed the chance to go and play in some really big tournaments on the European Tour,” added Zunic.

“I haven’t played as well as I would have liked so far but I still have so much to look forward to for the rest of the year.”

While Zunic might be relaxing this afternoon, tomorrow in round two it will be back to business.

“I have had a bit of a break, so to be honest I haven’t been playing great the last couple of weeks. I spoke to my coach yesterday, I was hoping that getting back into tournament mode and getting the juices flowing again might put me in a good rhythm,” said McCardle, who has had four top-10 finishes on the PGA TOUR China so far this year.

The second round of the Northern Territory PGA Championship will tee off at Palmerston Golf Course at 7.30am with Jordan Zunic on course at 12.15pm.