Jordan Zunic secured his third PGA Tour of Australasia title in four years, winning the Queensland Open with a stroke victory over Rhein Gibson at the Brisbane Golf Club.

Zunic fired rounds of 67-68-65-73 to finish at 11-under-par after starting the final round with a five stroke advantage of the filed before a string of bogeys narrowed the margin. 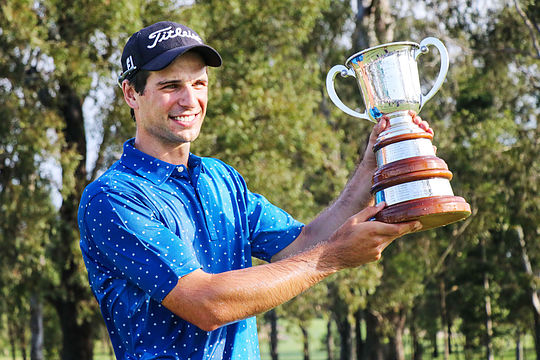 To Zunic’s credit he stabilised his round with a vital birdie on the 17th before a regulation par on the last for the victory.

“What a tough day, I got off to a good start with those first two holes but then my putter went cold, I was missing some short ones and the wind picked up a lot as well,” said Zunic.

“That was the hardest day we’ve had all week, I wasn’t hitting fairways on certain holes and I had to scramble around this golf course which is very difficult.”

What’s In The Bag – Jordan Zunic

Zunic’s previous wins on the Australian PGA Tour include the New Zealand Open in 2015 and Northern Territory PGA Championship in 2016.

Zunic now has a full playing rights on the PGA Tour of Australasia until the end of 2019, yet his immediate plans see the Wollongong native and former Australian PGA Rookie of the year off to Spain to attempt to qualify for the European Tour via the final stage of qualifying school.

“It’s such a bonus for me this week because my New Zealand Open winner’s exemption was going to run out at the end of this year so I had to keep my card this year.”

“Missing the NSW Open and Australian Open would’ve been a huge hit for me on the money list so winning this week takes care of Australia next year.”

“I can purely focus on Europe next week and hopefully come back with a card. I’ll play the Australian PGA Championship this year though, I’ve got some unfinished business there.”

Zunic has also played a number of events on the European Challenge Tour where his results in Europe have been mixed, yet in 2017, Zunic’s world ranking reached his lowest level yet at 300th.

Sunday’s win was certainly timely as Zunic, 26, has proven he’s ready to make his move on the bigger stage.

In 2016, Zunic qualified to play the World Golf Championship-HSBC Champions for his PGA Tour debut. It has allowed him to see success on the main world tours, playing in a handful of European Tour events, including a T9 finish at the 2015 Australian PGA Championship.

Early last season on the Web.Com Tour, Rhein Gibson had a number of chances to win with two third place finishes and Sunday’s runner-up finish was the kick start he’ll me looking for heading into the Australian summer of golf.

Since 2013, Rhein has recorded 22 top-10 finishes, including six second places, but is yet to record a victory as a professional.

For his win, Zunic collects $16,500 and moves to 20th on the PGA Tour of Australasia Order of Merit.